Prognostic and Predictive Factors for the Curative Treatment of Esophageal and Gastric Cancer in Randomized Controlled Trials: A Systematic Review and Meta-Analysis
Previous Article in Special Issue

The Interaction between Laminin-332 and α3β1 Integrin Determines Differentiation and Maintenance of CAFs, and Supports Invasion of Pancreatic Duct Adenocarcinoma Cells

Ovarian carcinoma, the most lethal gynecological cancer, is characterized by late diagnosis, with drug resistance limiting the efficacy of platinum-based therapy. Since some integrins are upregulated in cancer, including ovarian carcinoma, they represent a potential target for drug delivery. Receptor tyrosine kinases are also deregulated in cancer and their expression has been associated with drug resistance. Here, the antitumor effects of three conjugates possessing a selective binder of the extracellular portion of integrin αVβ3 covalently linked to the tyrosine kinase inhibitor sunitinib were investigated in cisplatin-sensitive and -resistant ovarian carcinoma cells expressing both tyrosine kinase VEGFR2 and αVβ3 at different levels. We found that one of the three compounds was active in inhibiting the growth of both drug-sensitive and -resistant cells in the micromolar range with a slightly increased potency in resistant cells as compared to sunitinib. The same compound markedly impaired cell migratory and invasive abilities and reduced paxillin phosphorylation. Antitumor activity studies in IGROV-1/Pt1 cells xenografted in nude mice revealed a striking activity of this conjugate versus sunitinib. Taken together, our results support the interest of integrin-targeted sunitinib conjugates for the treatment of drug-resistant tumors. View Full-Text
Keywords: integrins; molecular conjugates; ovarian carcinoma; RGD ligands; RTK inhibitors; sunitinib integrins; molecular conjugates; ovarian carcinoma; RGD ligands; RTK inhibitors; sunitinib
►▼ Show Figures 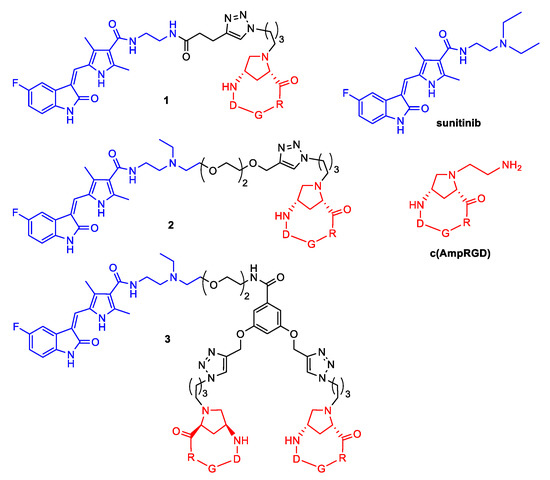