Bioactivation and Regioselectivity of Pig Cytochrome P450 3A29 towards Aflatoxin B1

Pre-harvest aflatoxin contamination (PAC) is a major problem facing peanut production worldwide. Produced by the ubiquitous soil fungus, Aspergillus flavus, aflatoxin is the most naturally occurring known carcinogen. The interaction between fungus and host resulting in PAC is complex, and breeding for PAC resistance has been slow. It has been shown that aflatoxin production can be induced by applying drought stress as peanut seeds mature. We have implemented an automated rainout shelter that controls temperature and moisture in the root and peg zone to induce aflatoxin production. Using polymerase chain reaction (PCR) and high performance liquid chromatography (HPLC), seeds meeting the following conditions were selected: infected with Aspergillus flavus and contaminated with aflatoxin; and not contaminated with aflatoxin. RNA sequencing analysis revealed groups of genes that describe the transcriptional state of contaminated vs. uncontaminated seed. These data suggest that fatty acid biosynthesis and abscisic acid (ABA) signaling are altered in contaminated seeds and point to a potential susceptibility factor, ABR1, as a repressor of ABA signaling that may play a role in permitting PAC. View Full-Text
Keywords: Arachis hypogaea; Aspergillus; aflatoxin; RNA-seq; non-coding RNA; uHPLC Arachis hypogaea; Aspergillus; aflatoxin; RNA-seq; non-coding RNA; uHPLC
►▼ Show Figures 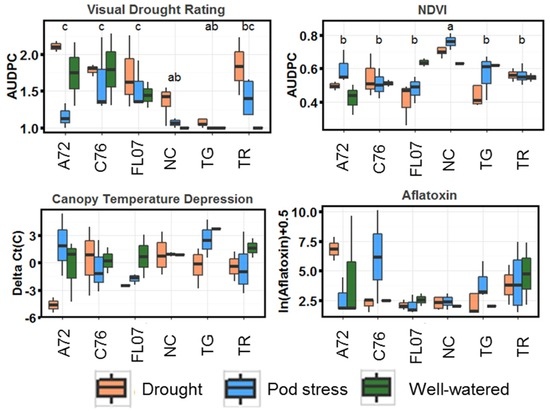