Practical Application of Novel Test Methods to Evaluate the Potency of Botulinum Toxin: A Comparison Analysis among Widely Used Products in Korea

Botulinum neurotoxins (BoNTs) are notorious toxins and powerful agents and can be lethal, causing botulism, but they are also widely used as therapeutics, particularly to treat neuromuscular disorders. As of today, the commercial BoNT treatments available are from native A or B serotypes. Serotype F has shown efficacy in a clinical trial but has scarcely been used, most likely due to its medium duration of effect. Previously, the uniqueness of the light chain of the F7 subtype was identified and reported, showing an extended interaction with its substrates, VAMPs 1, 2 and 3, and a superior catalytic activity compared to other BoNT/F subtypes. In order to more extensively study the properties of this neurotoxin, we engineered a modified F7 chimera, mrBoNT/F7-1, in which all the regions of the neurotoxin were identical to BoNT/F7 except the activation loop, which was the activation loop from BoNT/F1. Use of the activation loop from BoNT/F1 allowed easier post-translational proteolytic activation of the recombinant protein without otherwise affecting its properties. mrBoNT/F7-1 was expressed, purified and then tested in a suite of in vitro and in vivo assays. mrBoNT/F7-1 was active and showed enhanced potency in comparison to both native and recombinant BoNT/F1. Additionally, the safety profile remained comparable to BoNT/F1 despite the increased potency. This new modified recombinant toxin F7 could be further exploited to develop unique therapeutics to address unmet medical needs. View Full-Text
Keywords: botulinum neurotoxin; recombinant protein; potency; safety profile; in vivo botulinum neurotoxin; recombinant protein; potency; safety profile; in vivo
►▼ Show Figures 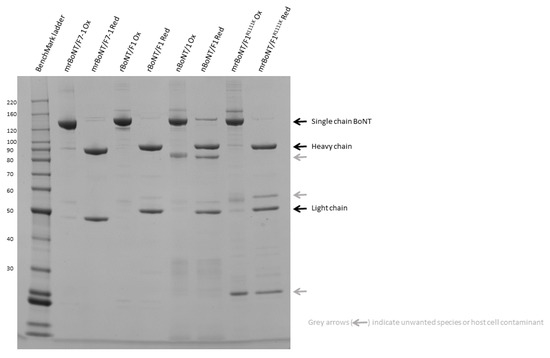