The Curious Case of the “Neurotoxic Skink”: Scientific Literature Points to the Absence of Venom in Scincidae
Previous Article in Journal

The Common Krait (Bungarus caeruleus) shares a distribution range with many other ‘phenotypically-similar’ kraits across the Indian subcontinent. Despite several reports of fatal envenomings by other Bungarus species, commercial Indian antivenoms are only manufactured against B. caeruleus. It is, therefore, imperative to understand the distribution of genetically distinct lineages of kraits, the compositional differences in their venoms, and the consequent impact of venom variation on the (pre)clinical effectiveness of antivenom therapy. To address this knowledge gap, we conducted phylogenetic and comparative venomics investigations of kraits in Southern and Western India. Phylogenetic reconstructions using mitochondrial markers revealed a new species of krait, Romulus’ krait (Bungarus romulusi sp. nov.), in Southern India. Additionally, we found that kraits with 17 mid-body dorsal scale rows in Western India do not represent a subspecies of the Sind Krait (B. sindanus walli) as previously believed, but are genetically very similar to B. sindanus in Pakistan. Furthermore, venom proteomics and comparative transcriptomics revealed completely contrasting venom profiles. While the venom gland transcriptomes of all three species were highly similar, venom proteomes and toxicity profiles differed significantly, suggesting the prominent role of post-genomic regulatory mechanisms in shaping the venoms of these cryptic kraits. In vitro venom recognition and in vivo neutralisation experiments revealed a strong negative impact of venom variability on the preclinical performance of commercial antivenoms. While the venom of B. caeruleus was neutralised as per the manufacturer’s claim, performance against the venoms of B. sindanus and B. romulusi was poor, highlighting the need for regionally-effective antivenoms in India. View Full-Text
Keywords: venom evolution; new krait species from India; antivenom therapy; venom proteomics; venom gland transcriptomics; Romulus’ krait venom evolution; new krait species from India; antivenom therapy; venom proteomics; venom gland transcriptomics; Romulus’ krait
►▼ Show Figures 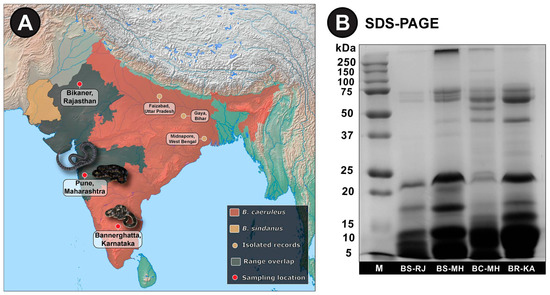