The South African strategic plan to reduce cardiovascular disease (CVD) includes reducing population salt intake to less than 5 g/day. A mass media campaign was undertaken to increase public awareness of the association between high salt intake, blood pressure and CVD, and focused on the reduction of discretionary salt intake. Community based surveys, before and after the campaign, were conducted in a cohort of black women aged 18–55 years. Questions on knowledge, attitudes and beliefs regarding salt use were asked. Current interest in engaging with salt reduction behaviors was assessed using the “stage of change” model. Five hundred fifty women participated in the baseline study and 477 in the follow-up survey. Most of the indicators of knowledge, attitudes and behavior change show a significant move towards considering and initiating reduced salt consumption. Post intervention, significantly more participants reported that they were taking steps to control salt intake (38% increased to 59.5%, p < 0.0001). In particular, adding salt while cooking and at the table occurred significantly less frequently. The findings suggest that mass media campaigns may be an effective tool to use as part of a strategy to reduce discretionary consumption of salt among the population along with other methods. View Full-Text
Keywords: salt reduction; mass-media public health campaign; salt strategy salt reduction; mass-media public health campaign; salt strategy
►▼ Show Figures 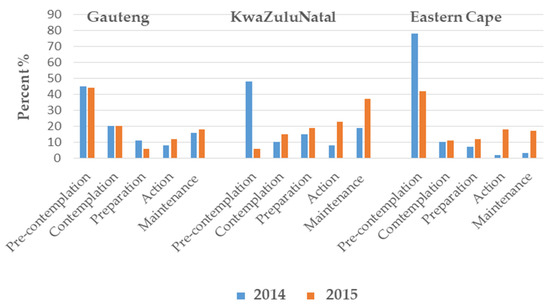