Acute kidney injury (AKI) is a common complication in sepsis. This study compared the effects of a fish oil-based with a mixed oil fat emulsion on remote renal injury in an antibiotic-treated septic murine model. Mice were randomly assigned to a normal control (NC) group and three septic groups. Sepsis was induced by cecal ligation and puncture (CLP). The antibiotic was injected intraperitoneally (IP) after CLP and then daily till the time of sacrifice. Three hours after antibiotic treatment, one of the septic groups was injected IP with a fish oil-based emulsion (FO), while the other two groups were given either a mixed oil emulsion (MO) or saline (SC). The septic groups were further divided into two separate time groups, with blood and kidneys samples collected at 24 h or 72 h post-CLP. The results showed that sepsis leads to the activation of neutrophils, T helper (Th)1/Th-2/Th-17 and Treg cells (p < 0.05). Plasma NGAL and mRNA expressions of renal MyD88 and TLR4 were also enhanced (p < 0.05). Compared to the SC group, the group given the fish oil-based emulsion had decreased plasma NGAL by 22% and Treg by 33%. Furthermore, renal gene expressions of MyD88 and TLR4 reduced by 46% and 62%, respectively, whereas heat shock protein 70 and peroxisome proliferator-activated receptor-γ increased by 158% and 69%, respectively (p < 0.05), at Day 3 after CLP. These results suggest that administration of a fish oil-based emulsion has favorable effects, maintaining blood T cell percentage, downregulating Treg expression, attenuating systemic and local inflammation and offering renal protection under conditions of antibiotic-treated polymicrobial sepsis. View Full-Text
Keywords: polymicrobial sepsis; acute kidney injury; n-3 PUFA; Treg cells; NGAL; inflammation polymicrobial sepsis; acute kidney injury; n-3 PUFA; Treg cells; NGAL; inflammation
►▼ Show Figures 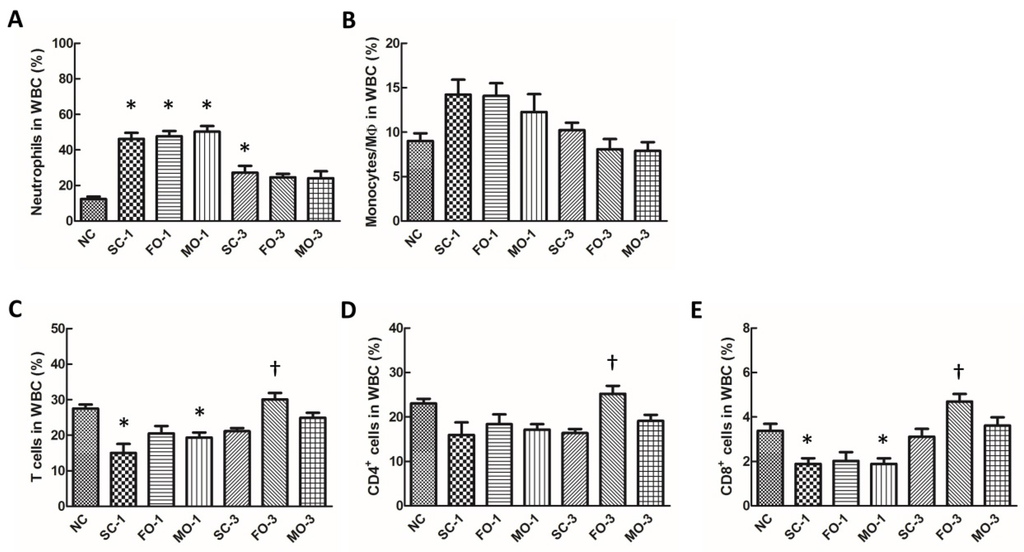