:
Human milk (HM) contains a plethora of metabolic hormones, including leptin, which is thought to participate in the regulation of the appetite of the developing infant. Leptin in HM is derived from a combination of de novo mammary synthesis and transfer from the maternal serum. Moreover, leptin is partially lipophilic and is also present in HM cells. However, leptin has predominately been measured in skim HM, which contains neither fat nor cells. We optimised an enzyme-linked immunosorbent assay for leptin measurement in both whole and skim HM and compared leptin levels between both HM preparations collected from 61 lactating mothers. Whole HM leptin ranged from 0.2 to 1.47 ng/mL, whilst skim HM leptin ranged from 0.19 to 0.9 ng/mL. Whole HM contained, on average, 0.24 ± 0.01 ng/mL more leptin than skim HM (p < 0.0001, n = 287). No association was found between whole HM leptin and fat content (p = 0.17, n = 287), supporting a cellular contribution to HM leptin. No difference was found between pre- and post-feed samples (whole HM: p = 0.29, skim HM: p = 0.89). These findings highlight the importance of optimising HM leptin measurement and assaying it in whole HM to accurately examine the amount of leptin received by the infant during breastfeeding.
Keywords:
leptin; human milk; whole human milk; skim human milk; appetite; obesity

Human milk (HM) is a heterogeneous fluid composed of a combination of macro- and micro-nutrients, cells, and a plethora of biomolecules that provide the necessary elements to sustain infant growth, protection and development [1,2,3]. The developmental effects of breastfeeding extend to the programming of various organs and systems of the newborn, including that of appetite regulation [4]. This early developmental programming results in a reduction in obesity and other metabolic diseases not only in the short-term, but also in adulthood [5,6,7,8,9]. The complex system of breastfeeding-mediated appetite regulation is attributable to various factors associated with the practice of breastfeeding, such as feeding on demand, but also potentially to a host of appetite regulatory molecules present in HM [4]. These include whey and casein proteins, HM oligosaccharides, and recently discovered in HM appetite regulatory hormones, including the well-documented adipokine leptin, adiponectin, and many others [10,11,12,13,14].
Amongst these appetite molecules, leptin is the most widely studied, being primarily known for promoting satiety and energy expenditure in adults through binding to the full length leptin receptor (ObRb) expressed on the arcuate nucleus of the hypothalamus [15]. In addition, leptin stimulates cell proliferation, regulates blood pressure, and is also involved in the T-cell immune response, thus displaying pleiotropic roles [16,17]. White adipose tissue is one of the main sources of serum leptin, secreting leptin proportionally to the number of white adipocytes present in the body [18]. Further, gastric chief cells, the placenta, and the mammary epithelium also synthesise and secrete leptin in adults [19,20,21,22].
In infants, HM is believed to be a major source of leptin early in life, with the endogenous leptin-synthesising mechanisms being still immature [23]. Leptin in HM has been hypothesised to be involved both in the short-term control of appetite and in developmental programming of appetite and energy-signalling pathways, promoting efficient energy control and storage throughout life [9,24]. Leptin administered during the first 14 days of life has been shown to act as a neurotrophic agent, promoting neural growth from the arcuate nucleus of the hypothalamus to additional appetite control centres located in the central nervous system [25]. HM leptin may provide short-term appetite control in the infant also by up-regulating circulating melanocortins, potent anorexigenic agents that promote satiety [26]. Leptin in HM is sourced both endogenously from the mammary gland and from the maternal serum, following secretion from white adipocytes and gastric chief cells into the bloodstream [9]. In the lactating mammary gland, serum-derived leptin combines with locally-synthesised leptin by the mammary epithelium to yield the total leptin content of HM [22].
Leptin in HM has been predominately measured in skim HM, which does not contain the cellular and fat components of HM [26,27,28]. Considering that the leptin peptide is capable of lipophilic interactions [29,30], it is plausible it may associate with the fat globule in whole HM. Moreover, HM cells, which are predominantly of epithelial origin in mature HM of healthy mother/infant dyads [1,31], are also thought to contribute to the leptin concentration of whole HM [22]. Few previous studies have measured leptin in whole HM using a radioimmuno-assay (RIA) [21,32]. However, RIA is not considered appropriate for measuring leptin in a lipid-rich medium such as whole HM due to interference of triglycerides with the binding of radioactive-labelled antigens to antibodies, which compromises the sensitivity of the assay [33,34]. Given the lack of an optimised assay to detect leptin in whole HM and the absence of reliable comparisons of leptin levels between whole and skim HM, we developed an enzyme-linked immunosorbent assay (ELISA) as a more appropriate means of measuring leptin in HM, with two antibodies assisting in immobilising the leptin antigen, and compared the leptin concentration between pre- and post-feed samples, as well as whole and skim HM.

All procedures involving the recruitment of lactating mothers and HM sample collection and analyses were approved by, and conducted in accordance with, the guidelines of the Human Research Ethics Committee of The University of Western Australia (ethics approval number RA/4/1/4253). All mothers provided informed written consent in the form of a secure online questionnaire that was administered and securely stored by The University of Western Australia. A single sample of whole HM expressed by a mother in her first month of lactation was used for optimisation of the leptin assay. Following assay optimisation, 61 lactating mothers (38 Caucasian, 23 non-Caucasian) with a mean maternal age of 33.6 ± 4.39 years, of full-term healthy infants were recruited to assess leptin differences between whole and skim HM (Table 1). HM samples (~5 mL) were obtained at approximately 1100 h aseptically, as previously described by Hassiotou et al. [35], from each breast before and after the infant fed from a single breast session either by using a Medela Symphony (Medela AG, Baar, Zug, Switzerland) breast pump or by hand expression. Samples were stored at −20 °C prior to analysis. Samples were collected at the second, fifth, ninth, and 12th months of lactation (Table 1).

2.2. Measurement of Leptin in Whole and Skim Human Milk by an Enzyme-Linked Immunosorbent Assay (ELISA)

The total fat content of HM samples was measured using the creamatocrit method [37,38]. Samples were placed in micro-haematocrit tubes, plugged with sealant and centrifuged at 12,000× g for ten min in a micro-haematocrit centrifuge (Hermle Z230H Labortechnik, Wehingen, Germany). The resultant milk column was placed on the creamatocrit analyser (Creamatocrit Plus, Medela Inc., McHenry, IL, USA) and the length of the fat layer and the total milk column was measured, from which the total fat content was calculated. It has been shown that Creamatocrit measurements strongly correlate with the biochemical spectroscopic esterified fatty acid assay [38,39,40].

The demographic characteristics of mothers and infants in the study population are shown in Table 2. All infants (n = 61) were born at term, healthy, and were growing appropriately for their age according to the World Health Organisation’s (WHO) growth charts for exclusively-breastfed infants [43,44]. Mean maternal body mass index (BMI) was highest at 27.1 ± 7.15 kg/m2 during the second month of lactation and lowest during the fifth month of lactation at 23.5 ± 4.46 kg/m2 (Table 1). Compared to the second month of lactation, maternal BMI decreased by 2.30 ± 1.55 kg/m2 over the first 12 months of breastfeeding (p < 0.01).

Measurement of leptin in whole and skim HM was optimised using an ELISA-based assay. One- to 20-fold dilutions for both skim and whole HM yielded leptin concentrations within the standard range of the assay (0–0.9 ng/mL), whilst dilutions above 20-fold reported values Redmond outside of the upper protein standard used (Figure 2). Mean leptin concentrations for 15-fold (whole HM: 0.8 ± 0.07 ng/mL, skim HM: 0.75 ± 0.09 ng/mL) and 20-fold (whole HM: 0.9 ± 0.11 ng/mL, skim HM: 0.9 ± 0.09 ng/mL) dilutions were close to the highest protein standard, thus further consideration was not given to these dilution factors (Figure 2). Ten-fold dilution of whole HM yielded the best recovery rates (97.7% ± 9.7%) (Table 2). Five-fold-diluted skim HM recovered 96.3% ± 1.2% of leptin (Table 2). Therefore, subsequent samples were diluted by 10-fold and five-fold with the diluent reagent for whole and skim HM samples, respectively, given these dilution factors recovered the highest percentage of leptin protein when the assay was performed for whole and skim HM.

We describe the first standardised and optimised ELISA assay for the measurement of leptin in both skim and whole HM, demonstrating higher concentrations of leptin in whole HM preparations compared to skim HM samples. Further, we provide evidence supporting the lack of an association between the fat component of HM and its leptin content, suggesting a contribution of HM cells, which merits further investigation. Accurate analysis of whole HM leptin will assist in clarifying the biological role of this milk component for the breastfed infant, improving our understanding of early developmental programming of appetite and its implications for obesity prevention later in life.

This study was supported by an unrestricted research grant from Medela AG (Switzerland). Sambavi Kugananthan received a Margaret Lomann-Hall Scholarship from the School of Anatomy, Physiology and Human Biology, The University of Western Australia. Zoya Gridneva received an Australian Postgraduate Award from The University of Western Australia (Australia). Many thanks are extended to all mothers who participated in this study, and to the Australian Breastfeeding Association for assistance in recruitment of participants. 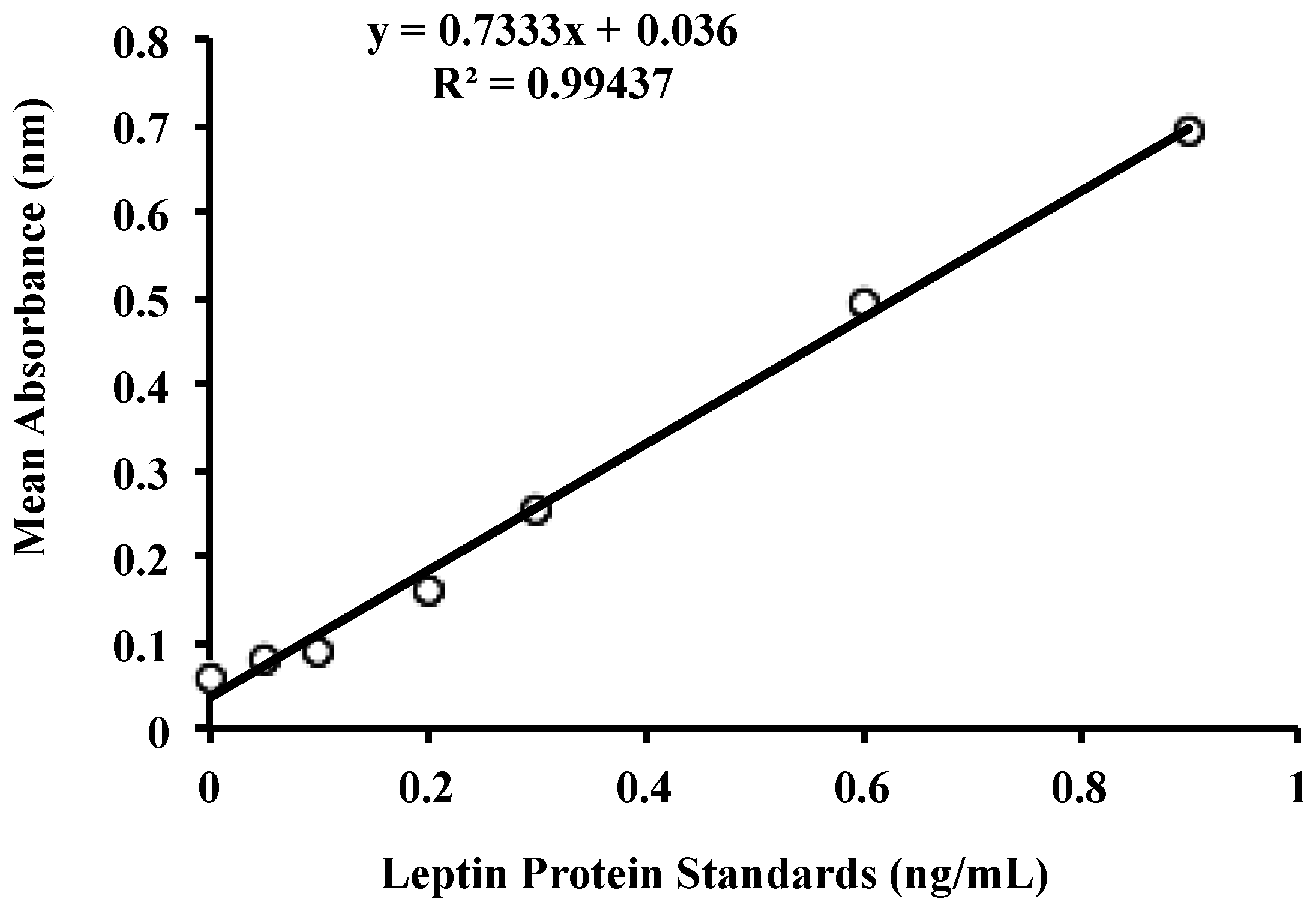 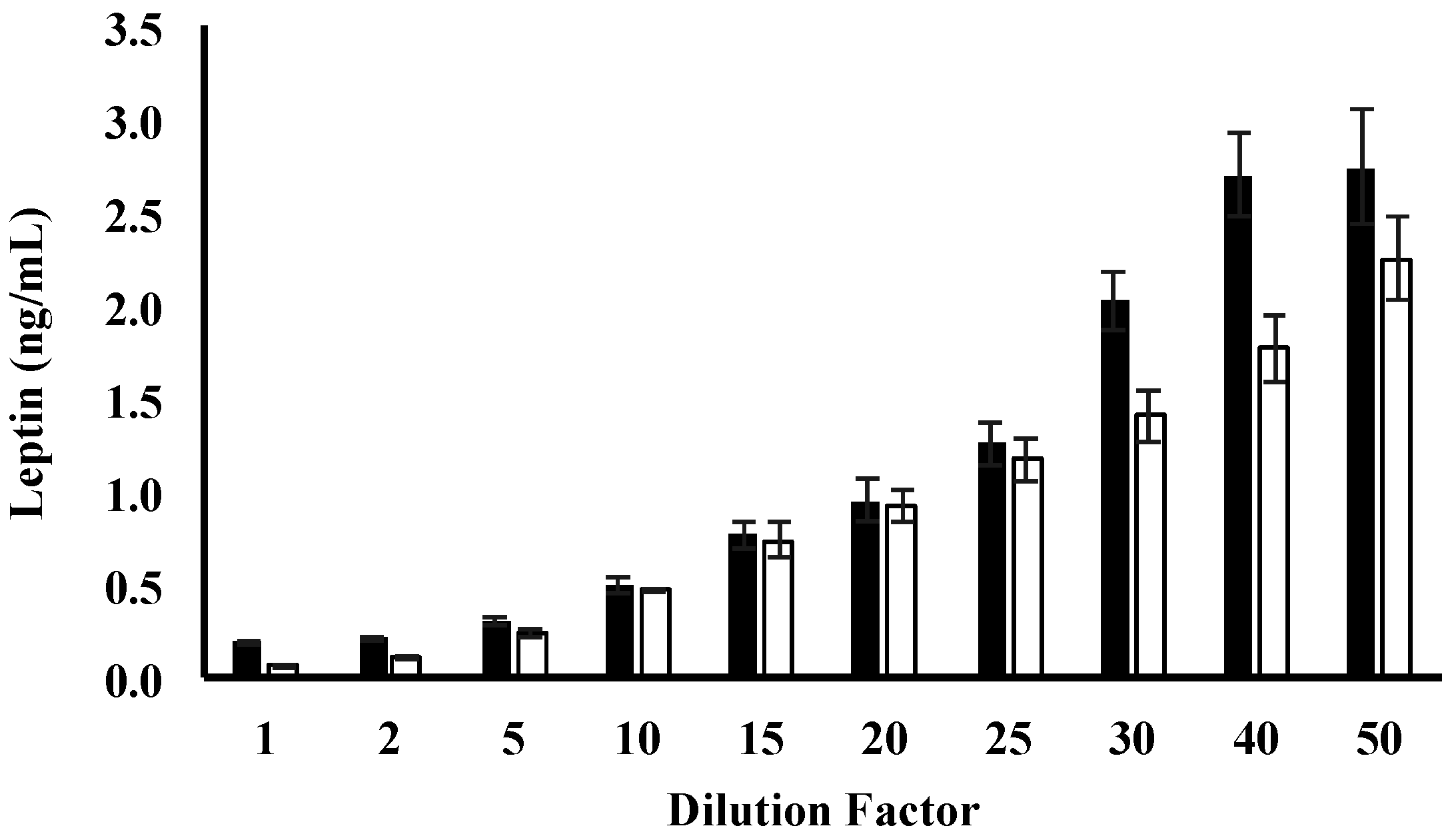