:
Studies suggest proton pump inhibitor (PPI) use impacts body weight regulation, though the effect of PPIs on energy intake, energy extraction, and energy expenditure is unknown. We used data on 3073 eligible adults from the National Health and Nutrition Examination Survey (NHANES). Medication use, energy intake, diet composition, and physical activity were extracted from NHANES. Multivariate regression models included confounding variables. Daily energy intake was similar between PPI users and non-users (p = 0.41). Diet composition was similar between the two groups, except that PPI users consumed a slightly greater proportion of calories from fat (34.5% vs. 33.2%; p = 0.02). PPI users rated themselves as being as physically active as their age/gender-matched peers and reported similar frequencies of walking or biking. However, PPI users were less likely to have participated in muscle-strengthening activities (OR: 0.53; 95% CI: 0.30–0.95). PPI users reported similar sedentary behaviors to non-users. Male PPI users had an increase in weight (of 1.52 ± 0.59 kg; p = 0.021) over the previous year compared to non-users, while female PPI users had a non-significant increase in weight. The potential mechanisms for PPI-associated weight gain are unclear as we did not find evidence for significant differences in energy intake or markers of energy expenditure.
Keywords:
proton pump inhibitor; weight; energy intake; physical activity

More than one third of US adults are obese [1]. Gastroesophageal reflux disease (GERD) is strongly associated with obesity and the prevalence of GERD in the US is estimated to be between 18.1% and 27.8% [2,3]. Patients with GERD often use acid suppressing medications, the most potent of which are proton pump inhibitors (PPI). However, PPI use is costly and has been associated with a number of potential risks [4].
Recently, there has been data to suggest that long-term PPI use leads to weight gain [5]. Acid suppression therapy has also been associated with suboptimal weight loss in patients who underwent laparoscopic Roux-en-Y gastric bypass (LRYGB) [6]. PPI use post-LRYGB may impair weight loss by modification of the gut microbiome and therefore influence energy extraction [7]. However, the extent of weight gain or impaired weight loss associated with PPI use and the potential causes are still largely unknown at this time. Obese patients with GERD are often advised to lose weight, but there is little data on energy intake, diet composition, or physical activity patterns of PPI users compared to PPI non-users.
Given that PPIs may cause weight gain in a population of patients who are more likely to be obese, it is important to understand whether this weight gain is related to energy intake, energy extraction, or energy expenditure. The aims of this cross-sectional study were to use data from the National Health and Nutrition Examination Survey (NHANES) to investigate whether differences in energy intake, diet composition, or physical activity patterns exist for PPI users compared to non-users and whether PPI use is associated with changes in body weight. We hypothesized that PPI use would be associated with increased energy intake, decreased physical activity, and weight gain.

Our data are from the NHANES, a complex multistage probability sample of the United States civilian, non-institutionalized population designed to address the health and nutrition status of US adults and children [8]. We used data on 4381 adults aged 20–74 years of age in the 2005–2006 NHANES to determine demographic data, medication use, diet composition, weights, and physical activity levels. There were 3073 individuals who met inclusion criteria and were included in the final analysis. Interviews were used to collect demographic data. Height and weight were measured by standard protocols with calibrated equipment, and BMI was calculated as kg/m2. Underweight individuals (BMI < 18.5 kg/m2; n = 91) and pregnant women (n = 313) were excluded. To focus on those not exerting cognitive restraint on food intake, we excluded individuals (n = 657) who answered “yes” to the question “Are you currently on any kind of diet, either to lose weight or for some other health-related reason?” All participants provided informed consent and the NHANES study protocol was approved by the National Center for Health Statistic Research Ethics Review Board.

The Dietary Supplements and Prescription Medication Section of the Sample Person Questionnaire collects information on the use of dietary supplements, non-prescription antacid medication use, and prescription medication use. Personal interviews, using the Computer-Assisted Personal Interviewing (CAPI) system, were conducted in the home to collect data on current medication use [8]. All medications and dosages were recorded. Each drug was recorded and eventually entered into a 3-level nested category system that assigns a therapeutic classification to each drug and each ingredient of a drug.

All participants were asked to complete two 24-h dietary recall interviews, including both weekdays and weekends. All food items and quantities consumed by each participant from midnight to midnight on the day preceding the interviews were recorded. The initial interview was conducted in person. The second interview was conducted by phone 3–10 days later, although not on the same day of the week as the in-person interview. The dietary recalls used the Automated Multiple Pass Method, which is designed to increase the efficiency and accuracy of the 24-h recall by including a thorough compilation of standardized food-specific questions and possible responses [8]. Participants were given a set of measuring guides to help in reporting food amounts during both interviews, as well as a food market booklet to assist in reporting food amounts during the phone interview. The data were used to calculate total energy intake (kcal/day) and the proportion of calories from sugar, non-sugar carbohydrates, saturated fatty acids (SFAs), polyunsaturated fatty acids (PUFAs), monounsaturated fatty acids (MUFAs), protein, and alcohol with the use of the USDA’s Food and Nutrient Database for Dietary Studies [8].

Participants were asked to provide (in pounds) what they weighed one year prior in response to the question “How much did you weigh a year ago?” Self-reported weights were converted to weight in kilograms. The outcome of change in body weight over the previous year was calculated as the difference between current measured weight and self-reported weight one year prior.

All analyses were adjusted for age, gender, education, race, BMI category (normal weight, overweight, obese), use of insulin, use of non-insulin diabetic medications, use of lipid-lowering medications, use of antidepressants, and total number of non-psychiatric/non-diabetic medications. The response to the question, “Compared with most men/women your age, would you say that you are more active, less active, or about the same?” was also included as a covariate for energy intake because of its strong association with BMI, several other covariates, and energy intake. BMI categories were defined as normal weight (18.5 < BMI < 25), overweight (25 ≤ BMI < 30), and obese (BMI ≥ 30). Underweight individuals were excluded. Education was dichotomized into those who had attended at least some college and those who had a high school degree or less. We coded race as Mexican-American, non-Hispanic white, and non-Hispanic black.

Statistical analyses were performed using Stata software (version 10.1; StataCorp, College Station, TX, USA). We used survey commands and applied the appropriate sample weights for the data to account for the unequal probabilities of selection. Means (± SE) for percentages and total calories from sugar, non-sugar carbohydrates, protein, SFAs, PUFAs, MUFAs, and alcohol were calculated. Univariate comparisons by PPI use were performed with linear regression. We used multivariable regression analyses (adjusted for the above covariates) to assess the relationship between PPI use and the primary outcomes: daily energy intake, self-assessment of physical activity compared to age/gender-matched peers (more, less, or the same), walking or biking at least 150 min (in the past 30 days), engaging in at least 10 consecutive minutes of any moderate/vigorous physical activity (in the past 30 days), engaging in any muscle strengthening activities (in the past 30 days), and sedentary behaviors. 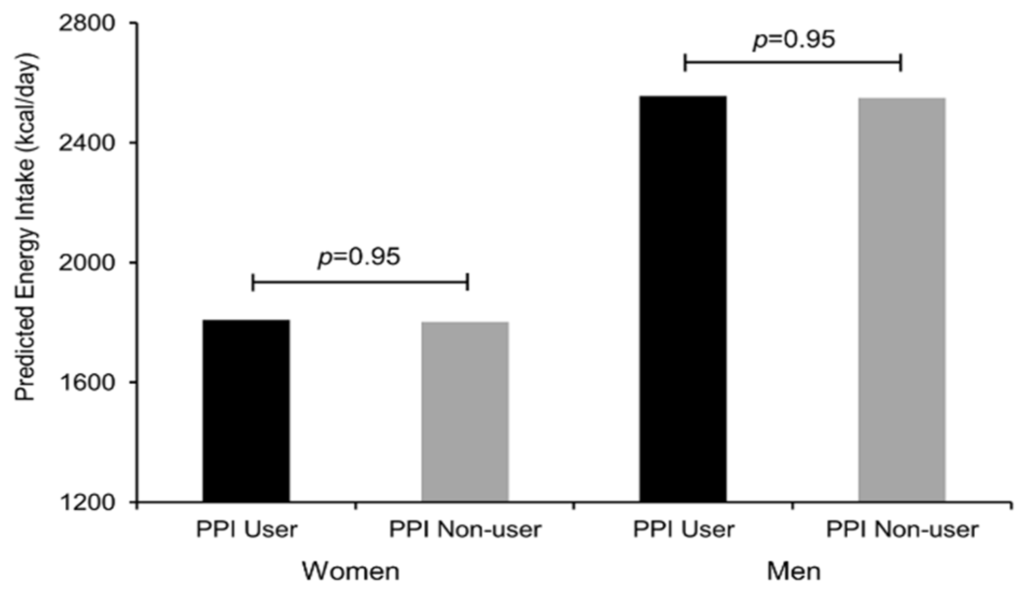 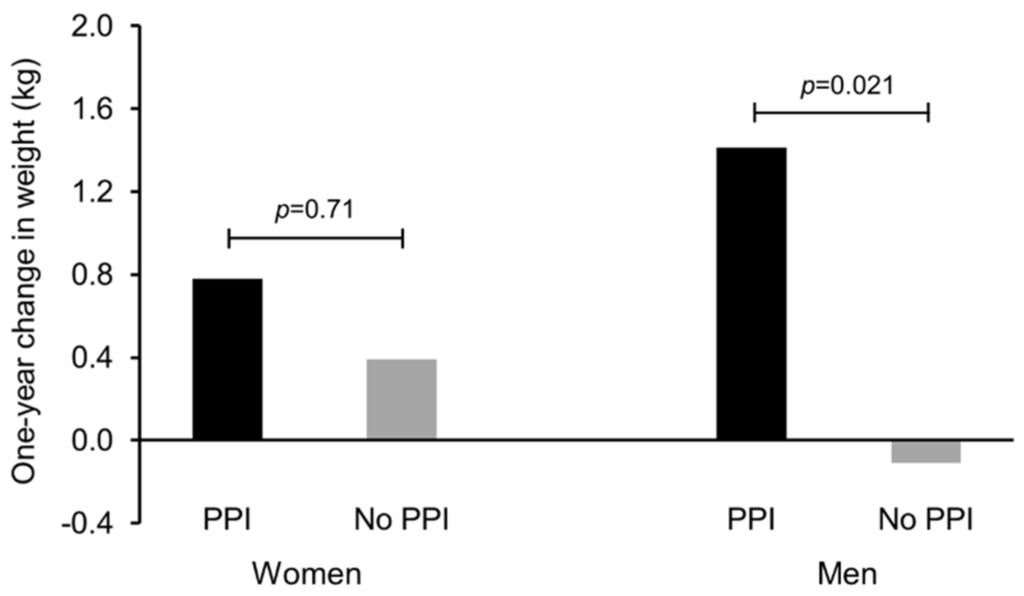 This research was supported by a grant from the American Gastroenterological Association (to Gregory L. Austin).