The Mediterranean Diet and Nutritional Adequacy: A Review

A few tightly regulated transport proteins mediate iron absorption across the intestinal epithelium. At the basolateral border of intestinal cells there is one identified transporter, ferroportin, for the transfer of intracellular iron to the vascular system. Here, we investigate the effects of ascorbate (vitamin C) on the regulation of ferroportin in human intestinal Caco-2 cells using ELISA and Western Blot analyses. The results indicate that ferroportin protein levels peak at 100 μM of added ascorbate with an increase of 274% (p = 0.02). At 150 μM of ascorbate, the increase was only 28% (p = 0.04), and at 200 μM there was no significant change from the baseline control. In addition, the ascorbate-induced, (at 150 μM) up-regulated ferroportin levels were associated with increased 55Fe transport across the basolateral border (19%, p = 0.03). Ascorbate-induced up-regulation of cellular ferroportin levels (no added iron) was associated with increased levels of the iron regulatory protein IRP2 (230%, p = 0.0009), and the hypoxia-inducible factor HIF2α (69%, p = 0.03). Thus, iron transport across the basal border via ferroportin is influenced by the intracellular status of ascorbate and IRP2 and HIF2α are involved. We discuss possible reasons for the ascorbate-effects and the dependence of cellular growth conditions for iron transport-related protein expression. View Full-Text
Keywords: ascorbate; iron; ferroportin; IRP2; HIF2α ascorbate; iron; ferroportin; IRP2; HIF2α
►▼ Show Figures 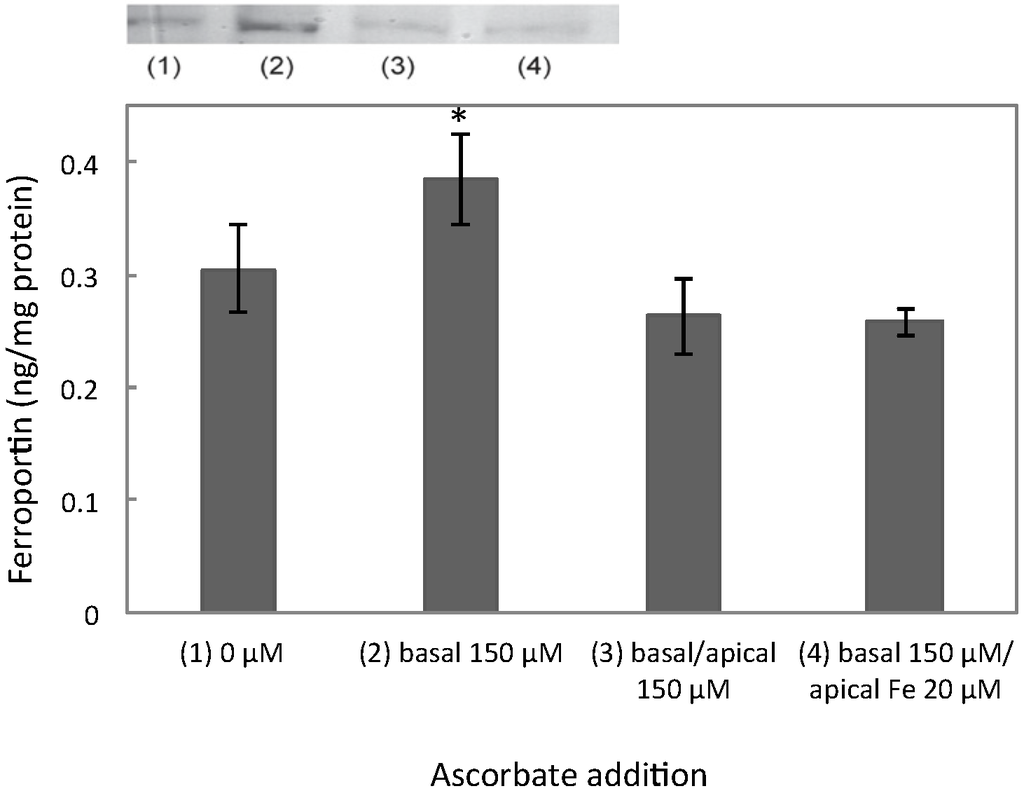