Body-Related Social Comparison and Disordered Eating among Adolescent Females with an Eating Disorder, Depressive Disorder, and Healthy Controls
Next Article in Special Issue

New Zealand has one of the highest incidence rates of Crohn’s Disease (CD), whilst the serum selenium status of New Zealanders is amongst the lowest in the world. A prospective case-control study in Auckland, New Zealand considered serum selenium as a potential CD risk factor. Serum selenium levels were significantly lower in CD patients compared to controls (101.8 ± 1.02 vs. 111.1 ± 1.01 ng/mL) (p = 5.91 × 10−8). Recent detailed studies in the United Kingdom have suggested an optimal serum level around 122 ng/mL, making the average CD patient in New Zealand selenium deficient. Of the 29 single nucleotide polymorphisms (SNPs) tested, 13 were found to significantly interact with serum selenium on CD. After adjustment for multiple testing, a significant interaction with serum selenium on CD was found for three SNPs, namely rs17529609 and rs7901303 in the gene SEPHS1, and rs1553153 in the gene SEPSECS. These three SNPs have not been reported elsewhere as being significantly associated with selenium or CD. It is unclear as to whether lower selenium levels are a cause or an effect of the disease. View Full-Text
Keywords: selenium; Crohn’s Disease; risk factor; single nucleotide polymorphism selenium; Crohn’s Disease; risk factor; single nucleotide polymorphism
►▼ Show Figures 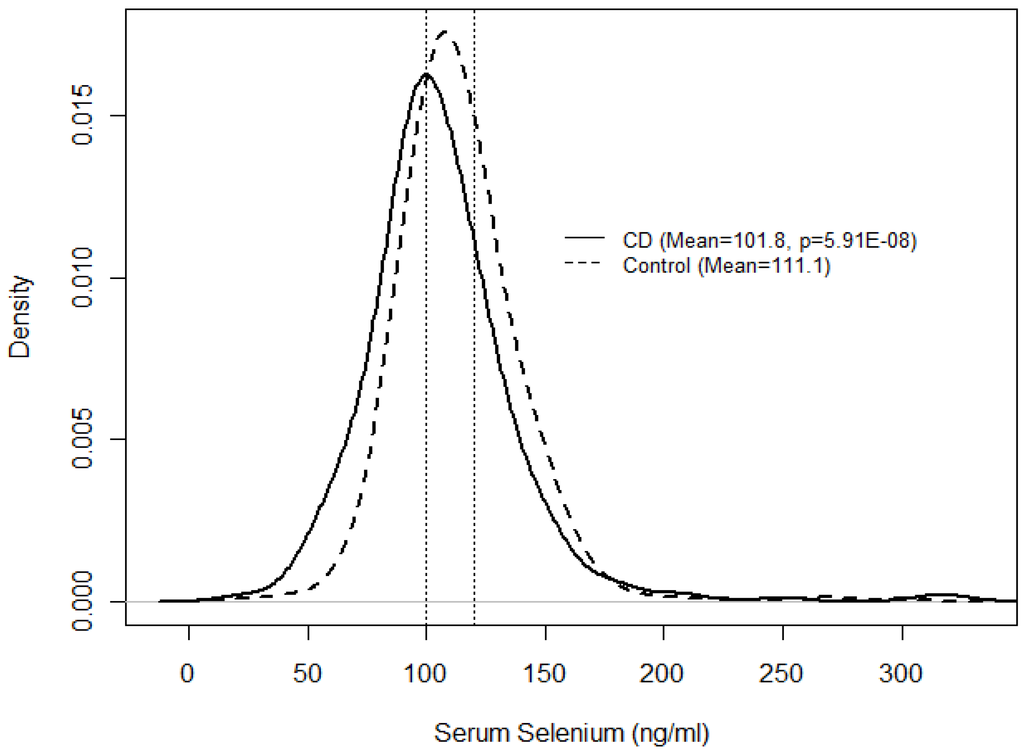