Gut Microbiota Profile and Its Association with Clinical Variables and Dietary Intake in Overweight/Obese and Lean Subjects: A Cross-Sectional Study

The association between lifetime weight fluctuations and clinical characteristics has been widely studied in populations with eating disorders (ED). However, there is a lack of literature examining the potential role of weight course as a transdiagnostic factor in ED so far. Therefore, the aim of this study is to compare ED severity and treatment outcomes among four specific BMI profiles based on BMI-trajectories across the lifespan: (a) persistent obesity (OB-OB; (n = 74)), (b) obesity in the past but currently in a normal weight range (OB-NW; n = 156), (c) normal weight throughout the lifespan (NW-NW; n = 756), and (d) current obesity but previously at normal weight (NW-OB; n = 314). Lifetime obesity is associated with greater general psychopathology and personality traits such as low persistence and self-directedness, and high reward dependence. Additionally, greater extreme weight changes (NW-OB and OB-NW) were associated with higher psychopathology but not with greater ED severity. Higher dropout rates were found in the OB-OB group. These results shed new light on the BMI trajectory as a transdiagnostic feature playing a pivotal role in the severity and treatment outcome in patients with ED. View Full-Text
Keywords: body mass index (BMI) profiles; eating disorders; obesity; treatment outcome body mass index (BMI) profiles; eating disorders; obesity; treatment outcome
►▼ Show Figures 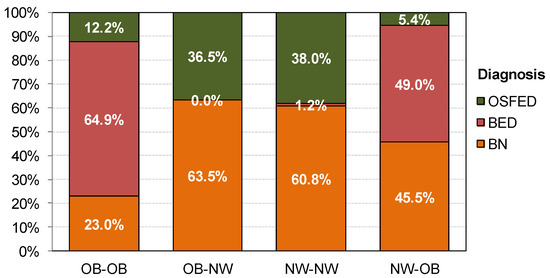