Human Milk Microbiota and Oligosaccharides: A Glimpse into Benefits, Diversity, and Correlations
Previous Article in Journal

Chung Thi Do
3 and

Background: Since 1979, the World Health Organization (WHO) and the United Nations Children’s Fund (UNICEF) have recommended the use of pasteurized human milk from a human milk bank (HMB) to feed low birthweight (LBW) and preterm newborns as the ‘first alternative’ when mothers are unable to provide their own milk. However, they have not issued any guidelines for the safe establishment and operation of an HMB. This gap contributes to the demand for gathering experiences from HMB networks, especially those from lower-middle income countries. To fill this knowledge gap, this study examines the characteristics of donors, donation, pasteurization, and recipients during the first four years of operation in the first HMB in Vietnam. Methods: Data about the donors, donation, pasteurization, and recipients were extracted from the web-based electronic monitoring system of the HMB from 1 February 2017 to 31 January 2021. Results: In the first four years of operation there were 433 donors who donated 7642 L of milk (66% from the community) with an increased trend in the amount of donated milk, donation duration, and average amount of milk donated by a donor. Approximately 98% of the donated milk was pasteurized, and 82% passed both pre- and post-pasteurization tests. Although the pass rate tended to increase with time, a few dips occurred. Of 16,235 newborns who received pasteurized donor milk, two thirds were in the postnatal wards. The main reason for the prescription of pasteurized donor milk was insufficient mothers’ own milk in the first few days after birth. There was a decreased trend in the amount and duration of using pasteurized donor milk in both postnatal wards and the neonatal unit. Conclusions: The HMB has operated efficiently in the previous four years, even during the COVID-19 pandemic, to serve vulnerable newborns. Ongoing evidence-based adjustments helped to improve the operation to recruit suitable donors, to increase the access to and quality of raw donor milk, to improve the pasteurization process, and to meet the need of more newborns. View Full-Text
Keywords: human milk bank; COVID-19; donor milk; prelacteal feeding; breastfeeding; newborn; early essential newborn care (EENC) human milk bank; COVID-19; donor milk; prelacteal feeding; breastfeeding; newborn; early essential newborn care (EENC)
►▼ Show Figures 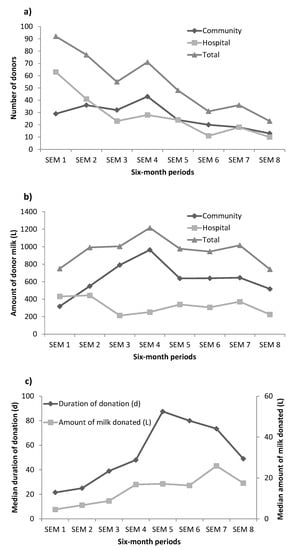