Do Parent–Child Dyads with Excessive Body Mass Differ from Dyads with Normal Body Mass in Perceptions of Obesogenic Environment?
Previous Article in Journal

The aim of this study is to evaluate the changes in the nutritional behavior of the Greek EPIC (European Prospective Investigation into Cancer and Nutrition) cohort participants regarding the consumption of basic food groups, during a 14-year period (1997–2011). In the Greek segment of the EPIC cohort study (EPIC-Greece), the changes in dietary habits of 23,505 participants regarding several food items/groups (vegetables, legumes, fruits, nuts, dairy, cereal, meat, fish/seafood, olive oil) were recorded repeatedly over time and compared to the baseline assessment (1994–1997), using a short, qualitative, follow-up questionnaire. Descriptive statistics were used to study the trends in nutritional behavior over time and ordinal logistic regression models to study the associations between the ordered responses of the questionnaire and sociodemographic and health factors. More participants reported an increase rather than a decrease in the consumption of vegetables, fruits, fish/seafood, whilst the inverse was observed for dairy products, nuts, cereals, and meat. No prevailing trend was noted for legumes and olive oil. Factors such as being female and having high education relate to more positive (healthy) changes in nutritional behavior. There seems to be primarily a change to a more healthy nutritional behavior of the EPIC-Greece participants over the follow-up period, with different participant subgroups presenting different degrees of nutritional changes. View Full-Text
Keywords: food questionnaire; nutritional behavior; follow-up dietary data; EPIC; ordinal regression food questionnaire; nutritional behavior; follow-up dietary data; EPIC; ordinal regression
►▼ Show Figures 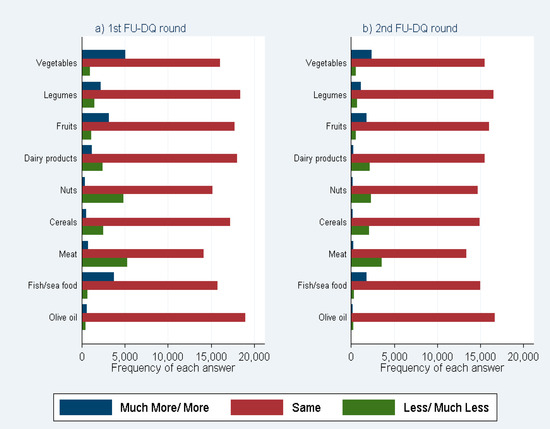