The relationship between adherence to the Mediterranean Diet (MD) and both physical fitness (PF) and physical activity (PA) level has been analysed in several studies. The aim of this research was to describe, compare and analyse the level of PF and PA in schoolchildren aged 6–13 in the Region of Murcia, according to adherence to the MD. A descriptive and cross-sectional study was performed. A total of 370 schoolchildren (44.9% girls) aged 6–13 (8.7 ± 1.8) from six primary schools in the Region of Murcia (Spain). Mediterranean Diet Quality Index for children and teenagers (KIDMED) was used to determinate the adherence to the MD. The ALPHA-FIT Test Battery was applied for assess body composition and PF. PA level was determined using Physical Activity Questionnaire for Older Children (PAQ-C). Only 25.9% of the schoolchildren had optimal adherence to the MD. Regarding the scores of the different PF tests in MD groups, only statistically significant differences were found for cardiorespiratory fitness (CRF) (p = 0.048) in boys. PA level showed statistically significant differences in both boys (p = 0.040) and girls (p = 0.016). A positive relationship was found between the KIDMED and PA level (p = 0.235). A higher probability of having a greater CRF (OR = 1.17; CI = 1.02–1.34) and PA level (OR = 7.84; CI = 2.84–21.60) was found in high MD group. These results suggest that an optimal adherence to the MD is associated with higher CRF and PA level in the selected schoolchildren. View Full-Text
Keywords: cardiorespiratory fitness; muscle strength; feeding patterns; lifestyle; children cardiorespiratory fitness; muscle strength; feeding patterns; lifestyle; children
►▼ Show Figures 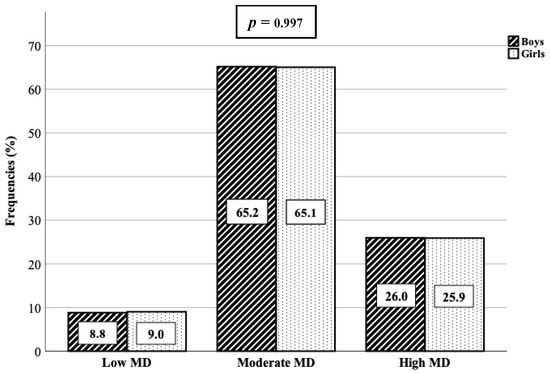