Gluten Free Wheat: Are We There?
Next Article in Special Issue

A Plant-Based Meal Stimulates Incretin and Insulin Secretion More Than an Energy- and Macronutrient-Matched Standard Meal in Type 2 Diabetes: A Randomized Crossover Study

Diminished postprandial secretion of incretins and insulin represents one of the key pathophysiological mechanisms behind type 2 diabetes (T2D). We tested the effects of two energy- and macronutrient-matched meals: A standard meat (M-meal) and a vegan (V-meal) on postprandial incretin and insulin secretion in participants with T2D. A randomized crossover design was used in 20 participants with T2D. Plasma concentrations of glucose, insulin, C-peptide, glucagon-like peptide-1 (GLP-1), amylin, and gastric inhibitory peptide (GIP) were determined at 0, 30, 60, 120, and 180 min. Beta-cell function was assessed with a mathematical model, using C-peptide deconvolution. Repeated-measures ANOVA was used for statistical analysis. Postprandial plasma glucose responses were similar after both test meals (p = 0.64). An increase in the stimulated secretion of insulin (by 30.5%; 95% CI 21.2 to 40.7%; p < 0.001), C-peptide (by 7.1%; 95% CI 4.1 to 9.9%; p < 0.001), and amylin (by 15.7%; 95% CI 11.8 to 19.7%; p < 0.001) was observed following consumption of the V-meal. An increase in stimulated secretion of GLP-1 (by 19.2%; 95% CI 12.4 to 26.7%; p < 0.001) and a decrease in GIP (by −9.4%; 95% CI −17.3 to −0.7%; p = 0.02) were observed after the V-meal. Several parameters of beta-cell function increased after the V-meal, particularly insulin secretion at a fixed glucose value 5 mmol/L, rate sensitivity, and the potentiation factor. Our results showed an increase in postprandial incretin and insulin secretion, after consumption of a V-meal, suggesting a therapeutic potential of plant-based meals for improving beta-cell function in T2D. View Full-Text
Keywords: beta-cell function; incretins; insulin resistance; nutrition; plant-based; type 2 diabetes beta-cell function; incretins; insulin resistance; nutrition; plant-based; type 2 diabetes
►▼ Show Figures 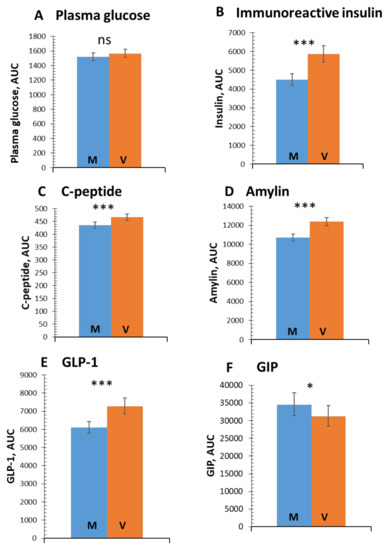