Victoria I. S. Lenz-Wiedemann
1,2 and

For in-season site-specific nitrogen (N) management of rice to be successful, it is crucially important to diagnose rice N status efficiently across large areas within a short time frame. In recent studies, the FORMOSAT-2 satellite images with traditional blue (B), green (G), red (R), and near-infrared (NIR) wavebands have been used to estimate rice N status due to its high spatial resolution, daily revisit capability, and relatively lower cost. This study aimed to evaluate the potential improvements of RapidEye and WorldView-2 data over FORMOSAT-2 for rice N status monitoring, as the former two sensors provide additional wavelengths besides the traditional four wavebands. Ten site-year N rate experiments were conducted in Jiansanjiang, Heilongjiang Province of Northeast China from 2008 to 2011. Plant samples and field hyperspectral data were collected at three growth stages: panicle initiation (PI), stem elongation (SE), and heading (HE). The canopy-scale hyperspectral data were upscaled to simulate the satellite bands. Vegetation index (VI) analysis, stepwise multiple linear regression (SMLR), and partial least squares regression (PLSR) were performed to derive plant N status indicators. The results indicated that the best-performed VIs calculated from the simulated RapidEye and WorldView-2 bands, especially those based on the red edge (RE) bands, explained significantly more variability for above ground biomass (AGB), plant N uptake (PNU), and nitrogen nutrition index (NNI) estimations than their FORMOSAT-2-based counterparts did, especially at the PI and SE stages. The SMLR and PLSR models based on the WorldView-2 bands generally had the best performance, followed by the ones based on the RapidEye bands. The SMLR results revealed that both the NIR and RE bands were important for N status estimation. In particular, the NIR1 band (760–900 nm from RapidEye or 770–895 nm from WorldView-2) was most important for estimating all the N status indicators. The RE band (690–730 nm or 705–745 nm) improved AGB, PNU, and NNI estimations at all three stages, especially at the PI and SE stages. AGB and PNU were best estimated using data across the stages while plant N concentration (PNC) and NNI were best estimated at the HE stage. The PLSR analysis confirmed the significance of the NIR1 band for AGB, PNU, and NNI estimations at all stages except for the HE stage. It also showed the importance of including extra bands (coastal, yellow, and NIR2) from the WorldView-2 sensor for N status estimation. Overall, both the RapidEye and WorldView-2 data with RE bands improved the results relative to FORMOSAT-2 data. However, the WorldView-2 data with three extra bands in the visible and NIR regions showed the highest potential in estimating rice N status. View Full-Text
Keywords: FORMOSAT-2; satellite remote sensing; nitrogen nutrition index; red edge; precision nitrogen management FORMOSAT-2; satellite remote sensing; nitrogen nutrition index; red edge; precision nitrogen management
►▼ Show Figures 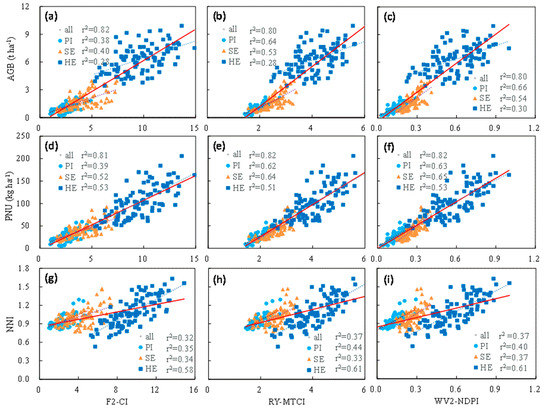