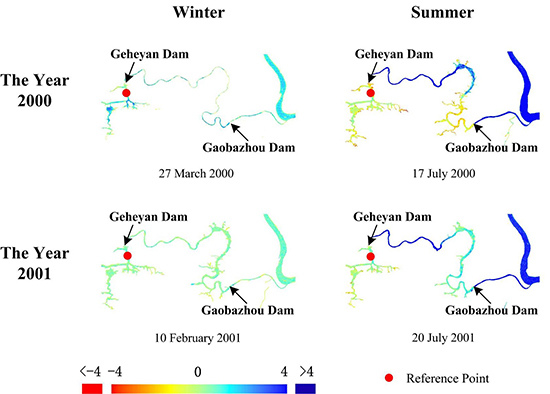 The primary data source was a series of Landsat-7 ETM+ satellite images. The spatial resolution of the thermal infrared band (10.45 to 12.5 μm) for the ETM+ is 60 m × 60 m; other bands (1, 2, 3, 4, 5 and 7) for ETM+ have a spatial resolution of 30 m. The selected Landsat scene was path 125/row 39, which covers the extent of the area of interest. Scenes that were mostly cloud-free from 2000 to 2014 were ordered and downloaded for free from the United States Geological Survey Earth Explorer website [32]. All images were Level 1T products, which have been precision and terrain corrected in the GeoTIFF format and are in the UTM Zone 49N projection and WGS datum. The resulting dataset comprised 54 full scenes, including 39 scan-line corrector off (SLC-off) images. In the analysis, the SLC-off data would lower the data quality and affect the result. Although the gaps caused by SLC-off appeared in different locations along the Qingjiang River, no gap filling method was used in this study to avoid the uncertainty brought by gap filling methods.

In this study, the spatio-temporal pattern of thermal pollution caused by dams was analyzed using the time series Landsat ETM+ images through the steps, as shown in Figure 5, which are introduced in detail in the following sections.

First, to determine the water temperature along the river, a water mask was generated. The unsupervised Iterative Self-Organizing Data Analysis Technique (ISODATA) was applied on all six 30 m spatial resolution bands for each Landsat scene [33]. The resulting clusters were then aggregated into a land/water classification map, which was used to create a binary water mask. Considering that the water mask has a finer spatial resolution (30 m) than the thermal band, only the coarse resolution pixels in the thermal infrared band that are fully integrated into the water mask were considered as water and were applied to determine water temperature.

Digital numbers (DN) for each water pixel in the band 6 (low gain) of Landsat ETM+ scenes were then used to derive water surface temperatures. First, digital numbers were converted to Top of Atmospheric (TOA) spectral radiance by applying the gain and bias coefficients provided along with Landsat ETM+ scenes: where is the TOA spectral radiance at wavelength in , DN is the digital number in the scene, and gain and bias are calibration parameters, and are set to be 0.067087 and −0.07 for the band 6 (low gain) of Landsat 7 ETM+ images.
Then, the TOA spectral radiance was further converted to a surface-leaving radiance by prescribing the target emissivity and removing the effect of the atmosphere, which are the most important issues for the estimation of temperature, based on the radiative transfer equation [34]. The equation used for this correction is: where is the corrected surface radiance, is the uncorrected spectral radiance calculated in Equation (1), is the upwelling radiance, is the downwelling radiance, is the atmospheric transmissivity, and is the water emissivity.
In this study, the emissivity of water was set as 0.9885 according to Simon et al. [35]. The other three parameters used in Equation (2) were obtained with the atmospheric correction tool [36] developed by Barsi et al. [34] for the TM and ETM+ thermal bands. According to the date, time, and location of the Landsat scene, the atmospheric correction parameter calculator uses the National Centers for Environmental Prediction-modeled global atmospheric profiles as input data, along with MODTRAN and other integration algorithms, to derive site-specific atmospheric transmission, upwelling atmospheric radiance and down-welling atmospheric for each given Landsat scene.
Finally, the corrected water surface radiance was then converted into water temperature by using a sensor-specific approximation to Planck’s function [37]: where is the water temperature (K). and are thermal constants, where and for the Landsat ETM+ sensor. With all estimated water temperature values, the spatio-temporal pattern of thermal pollution caused by both dams could be analyzed. It needs to be emphasized that no in-situ observation water temperature data are available along the Qingjiang River at present. Therefore, in this study, the thermal pollution caused by both dams is assessed using only the Landsat ETM+ images.

In this paper, we proposed a method to monitor thermal pollution below dams using long time series Landsat ETM+ thermal infrared imagery. Taking Geheyan and Gaobazhou Dams located in the Qingjiang River as a case study, water surface temperatures were estimated from 54 Landsat ETM+ thermal images. Validation and uncertainty analysis results show that the estimated water surface temperatures have a high accuracy and can be applied to analyze the spatial and temporal pattern of thermal variations resulting from the dams. The results show that, on Qingjiang River, the Geheyan and Gaobazhou Dams greatly alter the downstream water temperatures. According to the operating mode, the discharges of both dams are taken from deep in the reservoir. Due to the thermal stratification characteristics of reservoirs, the temperature difference between the released water and the surface water is then large in summer and small in winter. Moreover, the flow discharges in summer are larger than those in winter. Therefore, both dams result in a typical thermal pollution phenomenon. In summer, water temperatures downstream of both dams are cooler than those upstream of both dams, and the water temperature difference exceeds 5 °C. In winter, the water temperature remains stable along the river. The area affected by the Geheyan Dam reaches beyond 20 km along the downstream river, and that affected by the Gaobazhou Dam extends beyond the point where the Qingjiang River enters the Yangtze River.
The results show that long term Landsat ETM+ thermal infrared imagery is a useful dataset to study the river thermal behavior and to assess the thermal pollution caused by dams in large rivers. However, other possibilities for improvement should still be considered. For example, given that Landsat ETM+ images have a global coverage, the proposed method should be applied in other dams globally to assess its ability. The water temperatures estimated from Landsat ETM+ images should be compared with more in-situ observed data in different areas to assess the uncertainty of results. Moreover, the results should be further explored with methods in other research fields, such as aquatic ecology.

Feng Ling, Giles M. Foody and Yun Du conceived of the main idea and designed the experiments. Hao Du, Xuan Ban performed the experiments. Xiaodong Li and Yihang Zhang analyzed the data. The manuscript was written by Feng Ling and was improved by the contributions of all of the co-authors. 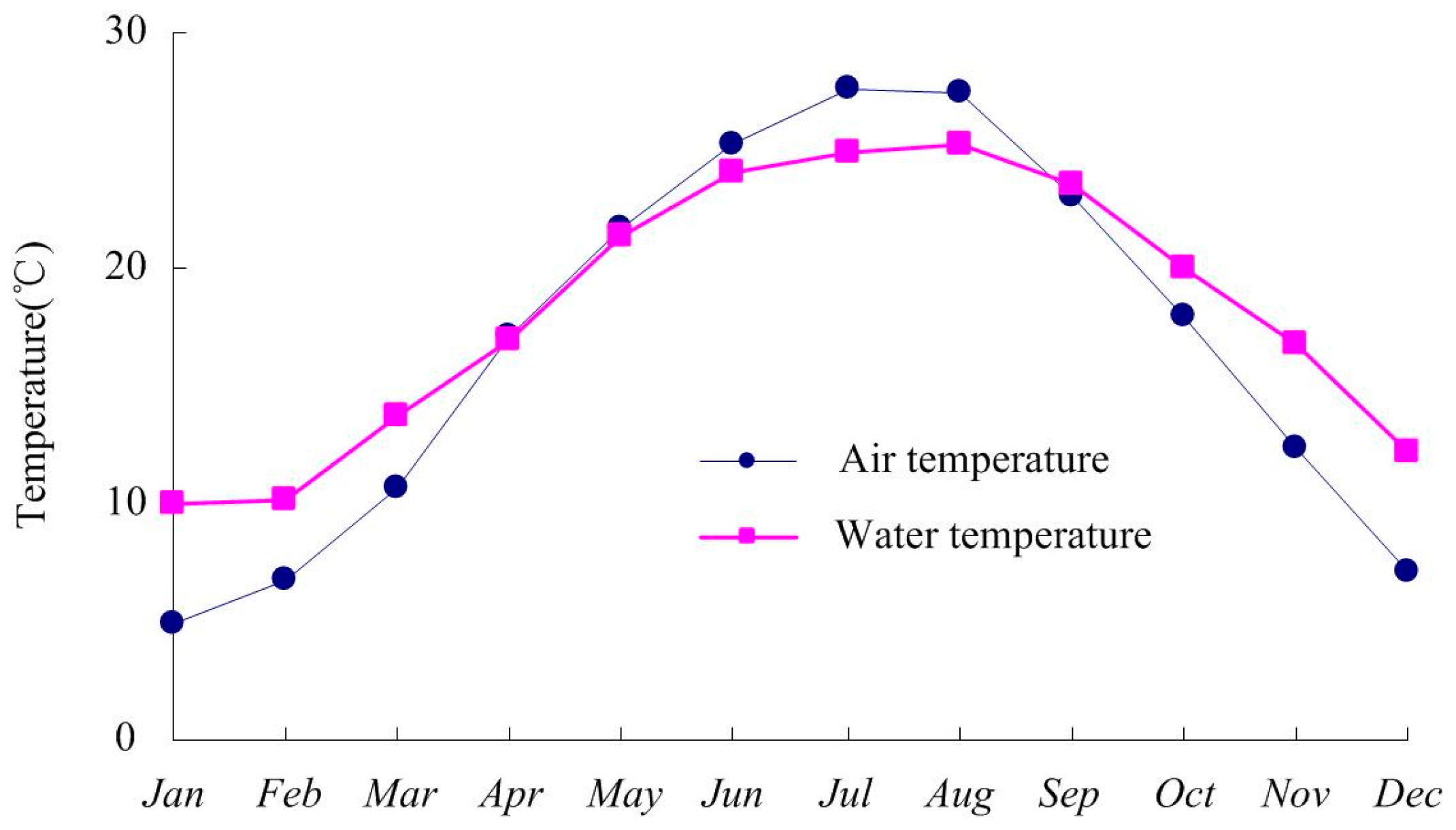 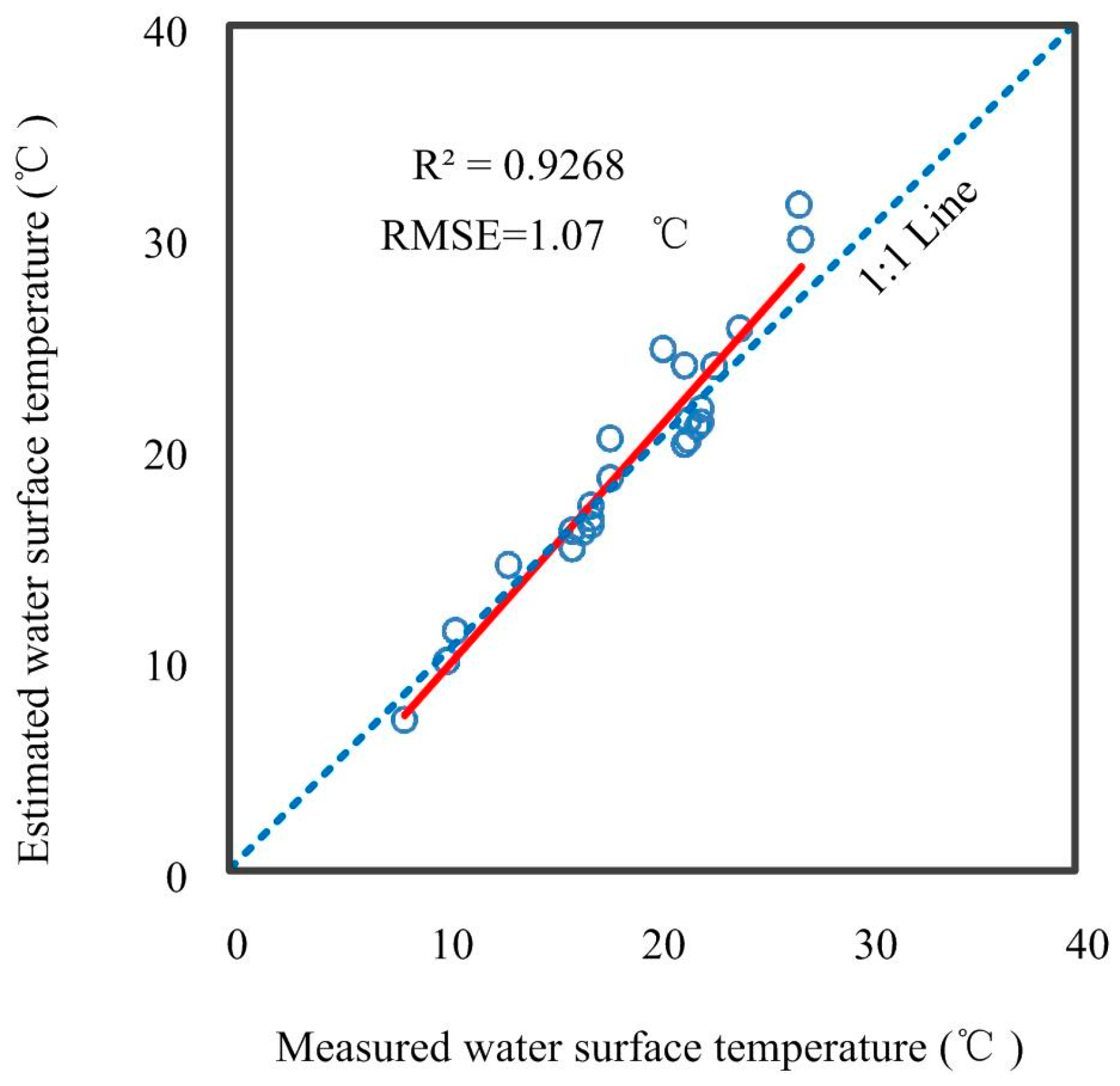 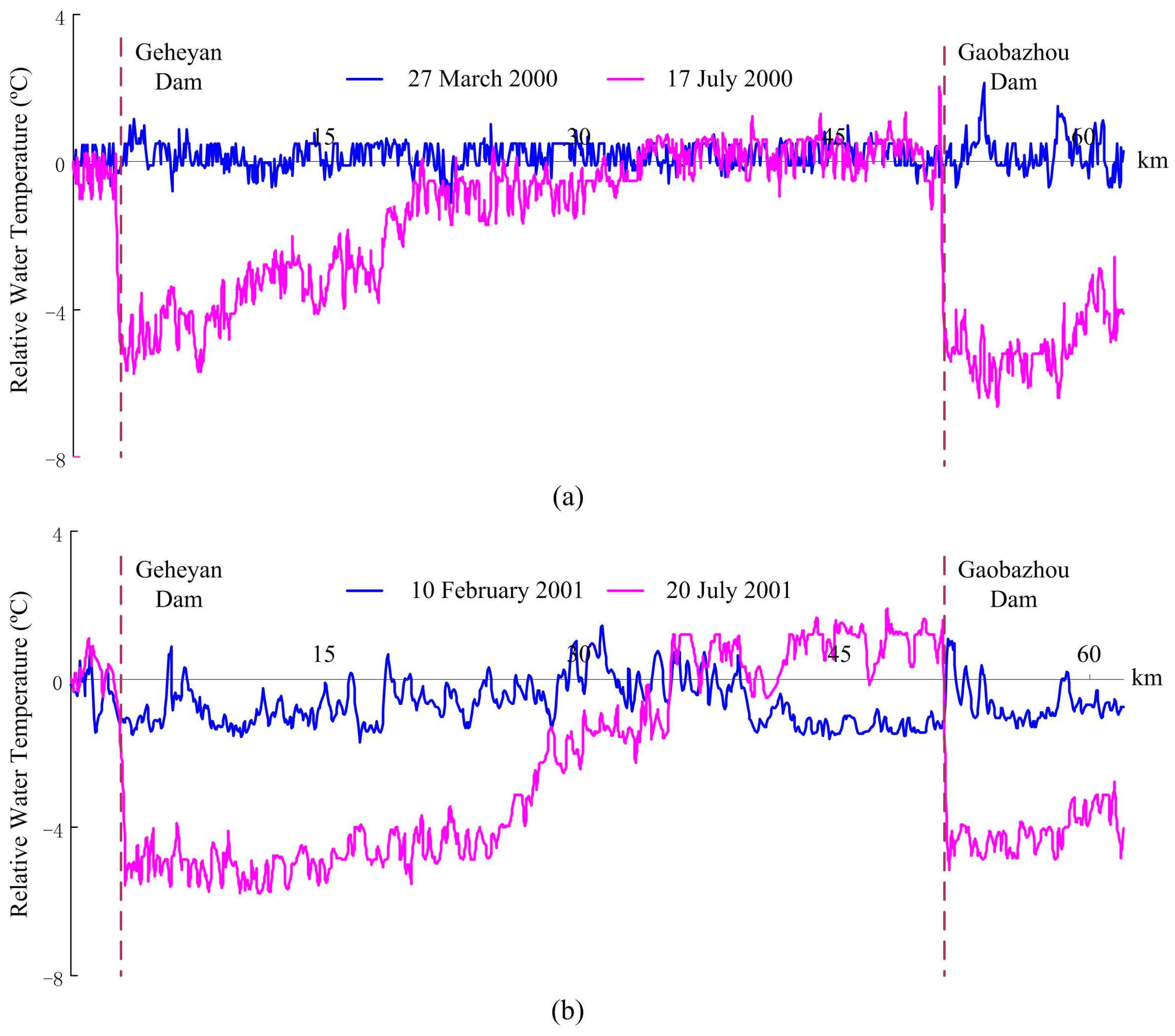