Suomi NPP has been successfully operating since its launch on 28 October 2011. As one of the major payloads, along with microwave and infrared sounders (Advanced Technology Microwave Sounder (ATMS), Cross-track Infrared Sounder (CrIS)), and ozone mapping/profiling (OMPS) instruments, the Visible Infrared Imaging Radiometer Suite (VIIRS) has performed for well beyond its mission design life. Its data have been used for a variety of applications for nearly 30 environmental data products, including global imagery twice daily with 375 and 750 m resolutions, clouds, aerosol, cryosphere, ocean color and sea-surface temperature, a number of land products (vegetation, land-cover, fire and others), and geophysical and social economic studies with nightlights. During the early days of VIIRS operational calibration and data production, there were inconsistencies in both algorithms and calibration inputs, for several reasons. While these inconsistencies have less impact on nowcasting and near real-time applications, they introduce challenges for time series analysis due to calibration artifacts. To address this issue, we developed a comprehensive algorithm, and recalibrated and reprocessed the Suomi NPP VIIRS radiometric data that have been produced since the launch. In the recalibration, we resolved inconsistencies in the processing algorithms, terrain correction, straylight correction, and anomalies in the thermal bands. To improve the stability of the reflective solar bands, we developed a Kalman filtering model to incorporate onboard solar, lunar, desert site, inter-satellite calibration, and a deep convective cloud calibration methodology. We further developed and implemented the Solar Diffuser Surface Roughness Rayleigh Scattering model to account for the sensor responsivity degradation in the near infrared bands. The recalibrated dataset was validated using vicarious sites and alternative methods, and compared with independent processing from other organizations. The recalibrated radiometric dataset (namely, the level 1b or sensor data records) also incorporates a bias correction for the reflective solar bands, which not only addresses known calibration biases, but also allows alternative calibrations to be applied if so desired. The recalibrated data have been proven to be of high quality, with much improved stability (better than 0.3%) and accuracy (by up to 2%). The recalibrated radiance data are now available from 2012 to 2020 for users and will eventually be archived on the NOAA CLASS database. View Full-Text
Keywords: Suomi NPP VIIRS recalibration; viirs reprocessing; radiometric consistency; radiometric stability; accuracy; Kalman filtering; SRRS model; WUCD; DNB reprocessing; VIIRS reprocessing system Suomi NPP VIIRS recalibration; viirs reprocessing; radiometric consistency; radiometric stability; accuracy; Kalman filtering; SRRS model; WUCD; DNB reprocessing; VIIRS reprocessing system
►▼ Show Figures 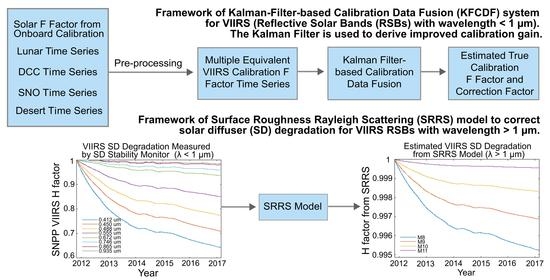