Canopy dynamics associated with fires in tropical forests play a critical role in the terrestrial carbon cycle and climate feedbacks. The aim of this study was to characterize forest canopy dynamics in the southern Amazon during the 2019 fire season (July–October) using passive microwave-based vegetation optical depth (VOD) and three optical-based indices. First, we found that precipitation during July–October 2019 was close to the climatic means, suggesting that there were no extreme hydrometeorological events in 2019 and that fire was the dominant factor causing forest canopy anomalies. Second, based on the active fire product (MCD14ML), the total number of active fires over each grid cell was calculated for each month. The number of active fires during the fire season in 2019 was above average, particularly in August and September. Third, we compared the anomalies of VOD and optical-based indices (the normalized difference vegetation index (NDVI), the enhanced vegetation index (EVI), and the normalized burn ratio (NBR)) against the spatiotemporal distribution of fires during July–October 2019. Spatially, the location with a concentrated distribution of significant negative VOD anomalies was matched with the grid cells with fire activities, whereas the concentrated distribution of strong negative anomalies in optical-based indices were found in both burned and unburned grid cells. When we focused on the temporal pattern over the grid cells with fire activity, the VOD and the optical-based indices behaved similarly from July to October 2019, i.e., the magnitude of negative anomalies became stronger with increased fire occurrences and reached the peak of negative anomalies in September before decreasing in October. A discrepancy was observed in the magnitude of negative anomalies of the optical-based indices and the VOD; the magnitude of optical-based indices was larger than the VOD in August–September and recovered much faster than the VOD over the grid cells with relatively low fire activity in October. The most likely reason for their different responses is that the VOD represents the dynamics of both photosynthetic (leaf) and nonphotosynthetic (branches) biomass, whereas optical-based indices are only sensitive to photosynthetic (leaf) active biomass, which recovers faster. Our results demonstrate that VOD can detect the spatiotemporal of canopy dynamics caused by fire and postfire canopy biomass recovery over high-biomass rainforest, which enables more comprehensive assessments, together with classic optical remote sensing approaches. View Full-Text
Keywords: the Amazon; fire; vegetation optical depth; optical indices; canopy changes the Amazon; fire; vegetation optical depth; optical indices; canopy changes
►▼ Show Figures 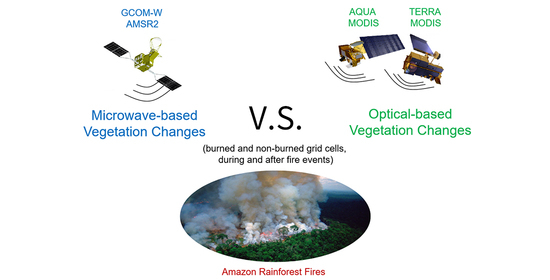