Seismo-Deformation Anomalies Associated with the M6.1 Ludian Earthquake on August 3, 2014

A time-frequency method retrieving the acceleration changes in the terminal stage of the
M6.1 Ludian earthquake in China is discussed in this article. The non-linear, non-stationary
seismo-demformation was obtained by using the Hilbert–Huang transform and followed by a
band-pass filter. We found that the temporal evolution of the residual GNSS-derived orientation
exhibits a unique disorder-alignment-disorder sequence days before the earthquake which
corresponds well with the four stages of an earthquake: elastic strain buildup, crack developments,
deformation, and the terminal stage of material failure. The disordering orientations are gradually
aligned with a common direction a few days before the terminal stage. This common direction is
consistent with the most compressive axis derived from the seismological method. In addition, the
region of the stress accumulation, as identified by the size of the disordered orientation, is
generally consistent with the earthquake preparation zones estimated by using numerical models. View Full-Text 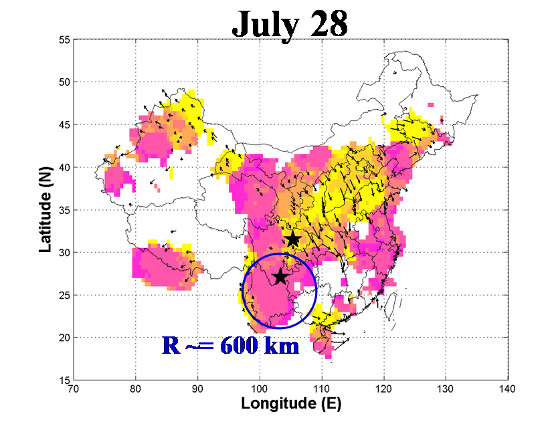