Landsat 5 has produced imagery for decades that can now be viewed and manipulated in Google Earth Engine, but a general, automated way of producing a coherent time series from these images—particularly over cloudy areas in the distant past—is elusive. Here, we create a land use and land cover (LULC) time series for part of tropical Mato Grosso, Brazil, using the Bayesian Updating of Land Cover: Unsupervised (BULC-U) technique. The algorithm built backward in time from the GlobCover 2009 data set, a multi-category global LULC data set at 300 m resolution for the year 2009, combining it with Landsat time series imagery to create a land cover time series for the period 1986–2000. Despite the substantial LULC differences between the 1990s and 2009 in this area, much of the landscape remained the same: we asked whether we could harness those similarities and differences to recreate an accurate version of the earlier LULC. The GlobCover basis and the Landsat-5 images shared neither a common spatial resolution nor time frame, But BULC-U successfully combined the labels from the coarser classification with the spatial detail of Landsat. The result was an accurate fine-scale time series that quantified the expansion of deforestation in the study area, which more than doubled in size during this time. Earth Engine directly enabled the fusion of these different data sets held in its catalog: its flexible treatment of spatial resolution, rapid prototyping, and overall processing speed permitted the development and testing of this study. Many would-be users of remote sensing data are currently limited by the need to have highly specialized knowledge to create classifications of older data. The approach shown here presents fewer obstacles to participation and allows a wide audience to create their own time series of past decades. By leveraging both the varied data catalog and the processing speed of Earth Engine, this research can contribute to the rapid advances underway in multi-temporal image classification techniques. Given Earth Engine’s power and deep catalog, this research further opens up remote sensing to a rapidly growing community of researchers and managers who need to understand the long-term dynamics of terrestrial systems. View Full-Text
Keywords: land cover; time series; deforestation; cerrado; Brazilian Amazon; Bayesian statistics; BULC-U; Mato Grosso; spatial resolution; Landsat; GlobCover land cover; time series; deforestation; cerrado; Brazilian Amazon; Bayesian statistics; BULC-U; Mato Grosso; spatial resolution; Landsat; GlobCover
►▼ Show Figures 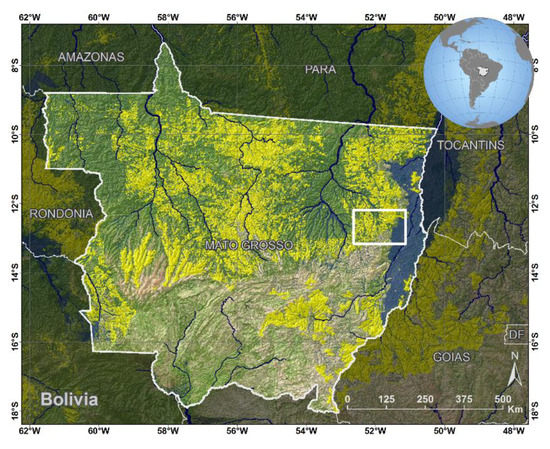