In the past decade, a vast amount of strategies, methods, and algorithms have been developed to explore the semantic interpretation of 3D point clouds for extracting desirable information. To assess the performance of the developed algorithms or methods, public standard benchmark datasets should invariably be introduced and used, which serve as an indicator and ruler in the evaluation and comparison. In this work, we introduce and present large-scale Mobile LiDAR point clouds acquired at the city campus of the Technical University of Munich, which have been manually annotated and can be used for the evaluation of related algorithms and methods for semantic point cloud interpretation. We created three datasets from a measurement campaign conducted in April 2016, including a benchmark dataset for semantic labeling, test data for instance segmentation, and test data for annotated single 360 laser scans. These datasets cover an urban area of approximately 1 km long roadways and include more than 40 million annotated points with eight classes of objects labeled. Moreover, experiments were carried out with results from several baseline methods compared and analyzed, revealing the quality of this dataset and its effectiveness when using it for performance evaluation. View Full-Text
Keywords: MLS point clouds; semantic labeling; instance segmentation MLS point clouds; semantic labeling; instance segmentation
►▼ Show Figures 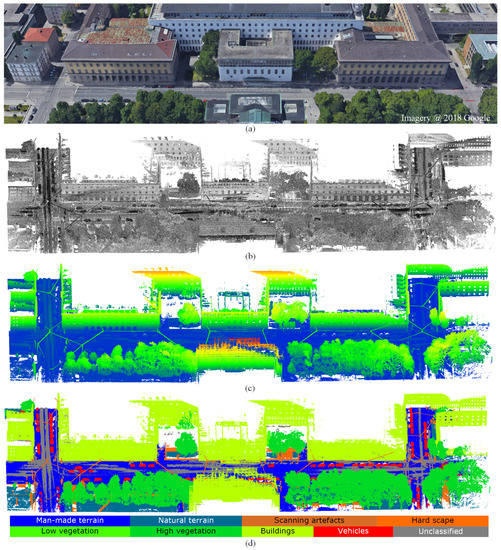