Interferometric synthetic aperture radar (InSAR) technology has been widely applied to measure Earth surface motions related to natural and anthropogenic crustal deformation phenomena. With the widespread uptake of data captured by the European Space Agency’s Sentinel-1 mission and other recently launched or planned space-borne SAR missions, the usage of the InSAR technique to detect and monitor Earth surface displacements will increase even more in the coming years. However, InSAR can only measure a one-dimensional motion along the radar line of sight (LOS), which makes interpretation and communication of InSAR measurements challenging, and can add ambiguity to the modelling process. Within this paper, we investigate the implications of the InSAR LOS geometry using simulated and observed deformation phenomena and describe a methodology for multi-geometry data fusion of LOS InSAR measurements from many viewing geometries. We find that projecting LOS measurements to the vertical direction using the incidence angle of the satellite sensor (and implicitly assuming no horizontal motions are present) may result in large errors depending on the magnitude of horizontal motion and on the steepness of the incidence angle. We quantify these errors as the maximum expected error from simulated LOS observations based on a Mogi deformation model. However, we recommend to use LOS observations from several image geometries wherever data are available, in order to solve for vertical and E–W oriented horizontal motion. For an anthropogenic deformation phenomenon observed in seven independent InSAR analyses of Envisat SAR data from the Sydney region, Australia, we find that the strong horizontal motion present could lead to misinterpretation of the actual motion direction when projecting LOS measurements to vertical (uplift instead of subsidence). In this example, the difference between multi-geometry data fusion and vertical projection of LOS measurements (at an incidence angle of 33.8°) reach up to 67% of the maximum vertical displacement rate. Furthermore, the position of maximum vertical motion is displaced horizontally by several hundred metres when the LOS measurements are projected. View Full-Text
Keywords: InSAR; surface displacements; line-of-sight; multi-geometry; data fusion; Mogi model; Envisat; crustal deformation InSAR; surface displacements; line-of-sight; multi-geometry; data fusion; Mogi model; Envisat; crustal deformation
►▼ Show Figures 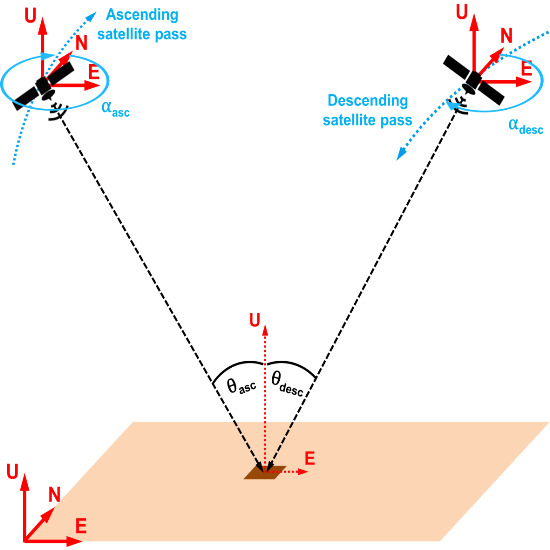