Remotely-Sensed Identification of a Transition for the Two Ecosystem States Along the Elevation Gradient: A Case Study of Xinjiang Tianshan Bogda World Heritage Site

The primary objective of this study is to leverage the integration of surface mapping data derived from optical, radar, and historic topographical studies with archaeological sampling to identify ancient settlement areas in the Northern Nile Delta, Egypt. This study employed the following methods: digitization of topographic maps, band indices techniques on optical data, the creation of a 3D model from SRTM data, and Sentinel-1 interferometric wide swath (IW) analysis. This type of study is particularly relevant to the search for evidence of otherwise hidden ancient settlements. Due to its geographical situation and the fertility of the Nile, Egypt witnessed the autochthonous development of predynastic and dynastic civilizations, as well as an extensive history of external influences due to Greek, Roman, Coptic, Islamic, and Colonial-era interventions. Excavation work at Buto (Tell el-Fara’in) in 2017–18, carried out by the Kafrelsheikh University (KFS) in cooperation with the Ministry of Antiquities, demonstrated that remote sensing data offers considerable promise as a tool for developing regional settlement studies and excavation strategies. This study integrates the mission work in Buto with the satellite imagery in and around the area of the excavation. The results of the initial Buto area research serve as a methodological model to expand the study area to the North Delta with the goal of detecting the extent of the ancient kingdoms of Buto and Sakha. The results of this research include the creation of a composite historical database using ancient references and early topographical maps (1722, 1941, 1950, and 1997), Optical Corona (1965), Landsat MSS (Multispectral Scanner System) (1973, 1978, and 1988), TM (Thematic Mapper) (2005) data, and Radar SRTM (2014) and Sentinel1 (2018 and 2019) data. The data in this study have been analyzed using the ArcMap, Envi, and SNAP software. The results from the current investigation highlight the rapid changes in the land use/land cover in the last century in which many ancient sites were lost due to agriculture and urban development. Three potential settlement areas have been identified with the Sentinel1 Radar data, and have been integrated with the early maps. These discoveries will help develop excavation strategies aimed at elucidating the ancient settlement dynamics and history of the region during the next phase of research. View Full-Text
Keywords: buried sites; ancient civilizations; northern Egyptian kingdom; GIS techniques; big data; Space Archaeology; Remote Sensing Survey buried sites; ancient civilizations; northern Egyptian kingdom; GIS techniques; big data; Space Archaeology; Remote Sensing Survey
►▼ Show Figures 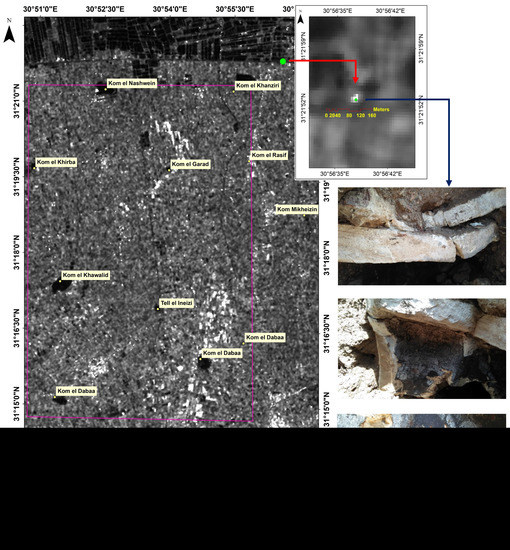