Unmanned aerial vehicles (UAVs) are widely used to protect critical infrastructure objects, and they are most often equipped with one or more RGB cameras and, sometimes, with a thermal imaging camera as well. To obtain as much information as possible from them, they should be combined or fused. This article presents a situation in which data from RGB (visible, VIS) and thermovision (infrared, IR) cameras and 3D data have been combined in a common coordinate system. A specially designed calibration target was developed to enable the geometric calibration of IR and VIS cameras in the same coordinate system. 3D data are compatible with the VIS coordinate system when the structure from motion (SfM) algorithm is used. The main focus of this article is to provide the spatial coherence between these data in the case of relative camera movement, which usually results in a miscalibration of the system. Therefore, a new algorithm for the detection of sensor system miscalibration, based on phase correlation with automatic calibration correction in real time, is introduced. View Full-Text
Keywords: UAVs; calibration; multimodal sensors; thermovision; camera; surveillance UAVs; calibration; multimodal sensors; thermovision; camera; surveillance
►▼ Show Figures 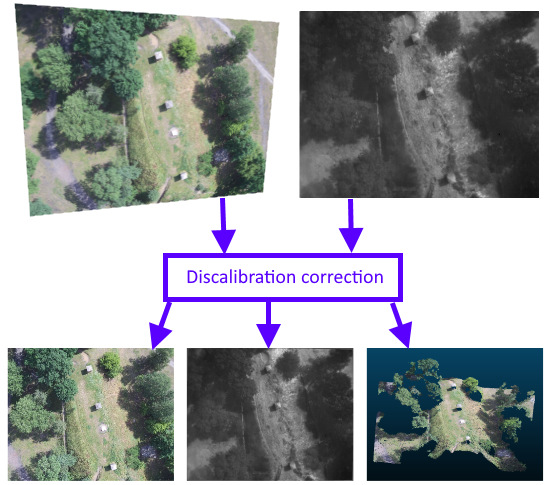