Airborne laser scanning (ALS) and digital aerial photogrammetry (DAP) have both been demonstrated as reliable sources of information on forest stand inventory attributes. The increasing availability of both datasets provides a means for improving stand dynamics information over time; however, the cost of multi-temporal ALS can be prohibitive in some circumstances. As a result, a combination of ALS at an initial time step and subsequent updates using DAP has been proposed as a cost-effective alternative for maintaining forest inventories. In this study we used low density ALS and DAP point clouds acquired in 2007 and 2015, respectively, to quantify changes in forest structure, in a highly disturbed boreal mixedwood forest in Alberta, Canada. We examined the capacity of the two technologies to model changes in top height (H), volume (V), and basal area (BA) using both direct and indirect approaches for estimation. Results indicate that the proportion of explained variance (adjusted R2) for the models derived from the ALS (Time 1; T1) and DAP (Time 2; T2) data were highest for models predicting H at T1, and lowest for BA at T1 and T2 (R2 was 0.66–0.70). The indirect estimates of change in H, BA, and V were calculated by subtracting the T1 and T2 predictions. For the direct approach, separate regression models were developed that used the differences in point cloud metrics between T1 and T2 as predictors. Results indicated that the accuracy of the estimates generated using the indirect approach were markedly lower than the estimates generated using the direct approach, with especially poor results for ∆BA and ∆V. Best results were achieved for ∆H using the direct approach with an R2 coefficient of 0.65 and an root mean square error (RMSE)% of 190.06%. We found that the error associated with change estimates of H, BA and V increased with the increase or decrease in mortality. We conclude that forest managers should act carefully when applying the multi-temporal and multi-sensor analysis of forest growth if forest growth is slow and the level of mortality is high. View Full-Text
Keywords: enhanced forest inventory; ALS; DAP; lidar; photogrammetry enhanced forest inventory; ALS; DAP; lidar; photogrammetry
►▼ Show Figures 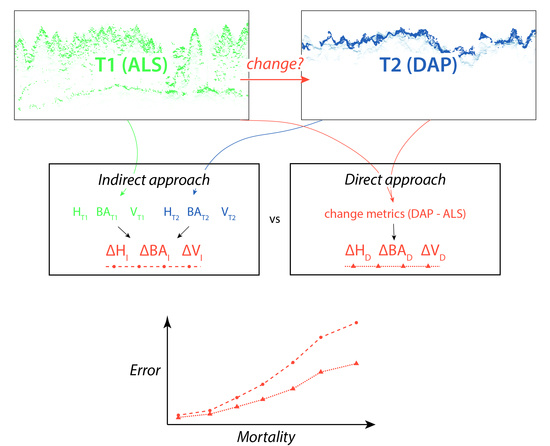