This paper describes a method of mapping riparian vegetation in semi-arid to arid environments using the Landsat normalized difference vegetation index (NDVI). The method successfully identified a range of riparian community types across the entire state of Nevada, USA, which spans 7 degrees of latitude and almost 4000 m of elevation. The landscape was stratified into units of similar elevation and solar exposure, and riparian areas were identified as having anomalously high NDVI within a local neighborhood. Thousands of calibration points were used in a simplex optimization to select the spatial neighborhood, the elevation and insolation strata, the minimum NDVI to be considered as potentially riparian, the number of standard deviations from the mean for an anomaly to be classified as riparian, and a limit on upslope position. Mapping of subpixel riparian corridors was improved by applying a directional high-pass filter to the NDVI data. Irrigated areas in agricultural and urban areas were removed based on land ownership maps and manual editing. The final map was tested with 400 independent test points: producer’s accuracy was 84.6% and user’s accuracy was 93.5%. This method should be broadly useful for mapping riparian features across large and complex regions with arid to semi-arid environments. View Full-Text
Keywords: Landsat; NDVI; rangelands; wetlands; streams; riparian Landsat; NDVI; rangelands; wetlands; streams; riparian
►▼ Show Figures 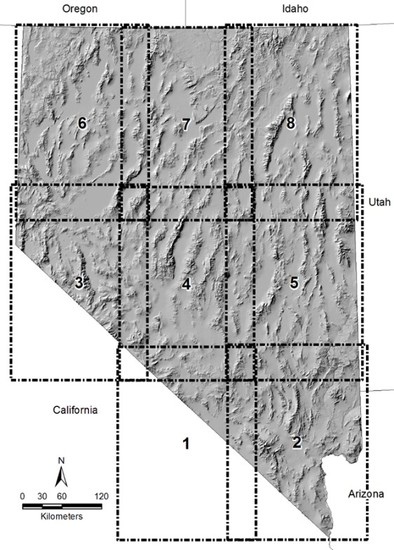