Changes in SO2 Flux Regime at Mt. Etna Captured by Automatically Processed Ultraviolet Camera Data
Next Article in Special Issue

Mapping drought from space using, e.g., surface soil moisture (SSM), has become viable in the last decade. However, state of the art SSM retrieval products suffer from very poor coverage over northern latitudes. In this study, we propose an innovative drought indicator with a wider spatial and temporal coverage than that obtained from satellite SSM retrievals. We evaluate passive microwave brightness temperature observations from the Soil Moisture and Ocean Salinity (SMOS) satellite as a surrogate drought metric, and introduce a Standardized Brightness Temperature Index (STBI). We compute the STBI by fitting a Gaussian distribution using monthly brightness temperature data from SMOS; the normal assumption is tested using the Shapior-Wilk test. Our results indicate that the assumption of normally distributed brightness temperature data is valid at the significance level. The STBI is validated against drought indices from a land surface data assimilation system (LDAS-Monde), two satellite derived SSM indices, one from SMOS and one from the ESA CCI soil moisture project and a standardized precipitation index based on in situ data from the European Climate Assessment & Dataset (ECA&D) project. When comparing the temporal dynamics of the STBI to the LDAS-Monde drought index we find that it has equal correlation skill to that of the ESA CCI soil moisture product (). However, in addition the STBI provides improved spatial coverage because no masking has been applied over regions with dense boreal forest. Finally, we evaluate the STBI in a case study of the 2018 Nordic drought. The STBI is found to provide improved spatial and temporal coverage when compared to the drought index created from satellite derived SSM over the Nordic region. Our results indicate that when compared to drought indices from precipitation data and a land data assimilation system, the STBI is qualitatively able to capture the 2018 drought onset, severity and spatial extent. We did see that the STBI was unable to detect the 2018 drought recovery for some areas in the Nordic countries. This false drought detection is likely linked to the recovery of vegetation after the drought, which causes an increase in the passive microwave brightness temperature, hence the STBI shows a dry anomaly instead of normal conditions, as seen for the other drought indices. We argue that the STBI could provide additional information for drought monitoring in regions where the SSM retrieval problem is not well defined. However, it then needs to be accompanied by a vegetation index to account for the recovery of the vegetation which could cause false drought detection. View Full-Text
Keywords: SMOS; drought index; summer 2018 drought SMOS; drought index; summer 2018 drought
►▼ Show Figures 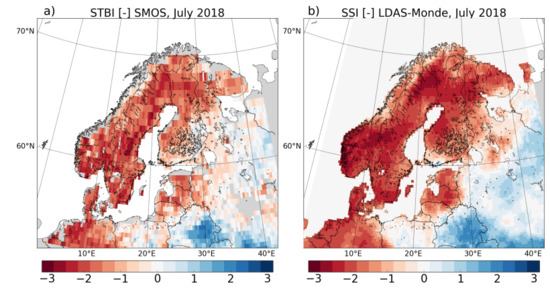