The rapid development of Satellite Precipitation Products (SPPs) has heightened the need for a hydro-meteorological assessment of the Integrated Multi-satellite Retrievals for Global Precipitation Measurement (IMERG) products in different climate and geographical regions. Reliability of the IMERG early (IMERG_E), late (IMERG_L) and final (IMERG_F) run products in precipitation estimations was evaluated over the Kelantan River Basin, Malaysia from 12 March 2014 to 31 December 2016. The three IMERG products were then incorporated into a calibrated Soil and Water Assessment Tool (SWAT) model to assess their reliability in streamflow simulations. Overall, monthly precipitation variability is well captured by the three SPPs. The IMERG_F exhibited a smaller systematic bias (RB = 7.14%) compared to the IMERG_E (RB = −10.42%) and IMERG_L (RB = −17.92%) in daily precipitation measurement. All the three SPPs (NSE = 0.66~0.71 and R2 = 0.73~0.75) performed comparably well as precipitation gauges (NSE = 0.74 and R2 = 0.79) in the daily streamflow simulation. However, the IMERG_E and IMERG_L showed a significant underestimation of daily streamflow by 27.6% and 36.3%, respectively. The IMERG_E and IMERG_F performed satisfactory in streamflow simulation during the 2014–2015 flood period, with NSE and R2 values of 0.5~0.51 and 0.62~0.65, respectively. With a better peak flow capture ability, the IMERG_F outperformed the near real-time products in cumulative streamflow measurement. The study has also shown that the point-to-pixel or pixel-to-pixel comparison schemes gave comparable conclusions. Future work should focus on the development of a standardized GPM hydro-meteorological assessment framework, so that a fair comparison among IMERG validation studies can be conducted. View Full-Text
Keywords: GPM; IMERG; SWAT; Kelantan; Malaysia; precipitation; streamflow; hydrology; meteorology; satellite precipitation product GPM; IMERG; SWAT; Kelantan; Malaysia; precipitation; streamflow; hydrology; meteorology; satellite precipitation product
►▼ Show Figures 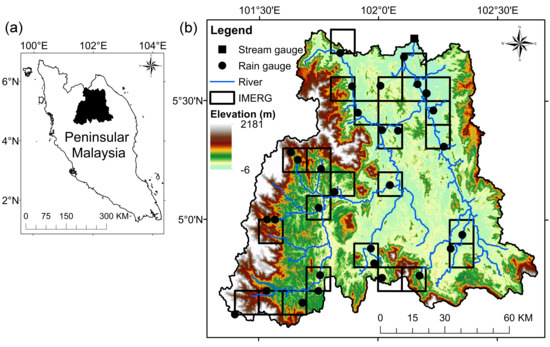