Landsat and MODIS data have been widely utilized in many remote sensing applications, however, the trade-off between the spatial resolution and temporal frequency has limited their capacities in monitoring detailed spatio-temporal dynamics. Spatio-temporal fusion methods based on a linear model that considers the differences between fine- and coarse-spatial-resolution images as linear can effectively solve this trade-off problem, yet the existing linear fusion methods either regard the coefficients of the linear model as constants or have adopted regression methods to calculate the coefficients, both of which may introduce some errors in the fusion process. In this paper, we proposed an enhanced linear spatio-temporal fusion method (ELSTFM) to improve the data fusion accuracy. In the ELSTFM, it is not necessary to calculate the slope of the linear model, and the intercept, which can be deemed as the residual caused by systematic biases, is calculated based on spectral unmixing theory. Additionally, spectrally similar pixels in a given fine-spatial-resolution pixel’s neighborhood and their corresponding weights were used in the proposed method to mitigate block effects. Landsat-7/ETM+ and 8-day composite MODIS reflectance data covering two study sites with heterogeneous and homogenous landscapes were selected to validate the proposed method. Compared to three other typical spatio-temporal fusion methods visually and quantitatively, the predicted images obtained from ELSTFM could acquire better results for the two selected study sites. Furthermore, the resampling methods used to resample MODIS to the same spatial resolution of Landsat could slightly, but did not significantly influence the fusion accuracy, and the distributions of slopes of different bands for the two study sites could all be deemed as normal distributions with a mean value close to 1. The performance of ELSTFM depends on the accuracy of residual calculation at fine-resolution and large landscape changes may influence the fusion accuracy. View Full-Text
Keywords: spatio-temporal fusion; Landsat; MODIS; image fusion spatio-temporal fusion; Landsat; MODIS; image fusion
►▼ Show Figures 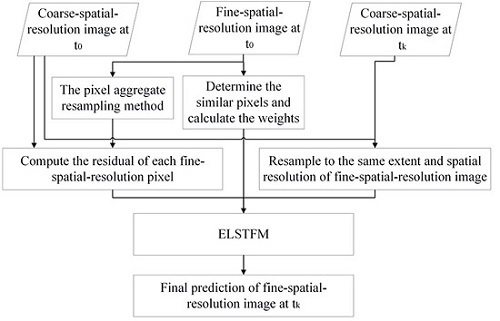