Land subsidence is one of the most important geological hazards in Beijing, China, and its scope and magnitude have been growing rapidly over the past few decades, mainly due to long-term groundwater withdrawal. Interferometric Synthetic Aperture Radar (InSAR) has been used to monitor the deformation in Beijing, but there is a lack of analysis of the long-term spatiotemporal evolution of land subsidence. This study focused on detecting and characterizing spatiotemporal changes in subsidence in the Beijing Plain by using Persistent Scatterer Interferometry (PSI) and geographic spatial analysis. Land subsidence during 2003–2015 was monitored by using ENVISAT ASAR (2003–2010), RADARSAT-2 (2011–2015) and TerraSAR-X (2010–2015) images, with results that are consistent with independent leveling measurements. The radar-based deformation velocity ranged from −136.9 to +15.2 mm/year during 2003–2010, and −149.4 to +8.9 mm/year during 2011–2015 relative to the reference point. The main subsidence areas include Chaoyang, Tongzhou, Shunyi and Changping districts, where seven subsidence bowls were observed between 2003 and 2015. Equal Fan Analysis Method (EFAM) shows that the maximum extensive direction was eastward, with a growing speed of 11.30 km2/year. Areas of differential subsidence were mostly located at the boundaries of the seven subsidence bowls, as indicated by the subsidence rate slope. Notably, the area of greatest subsidence was generally consistent with the patterns of groundwater decline in the Beijing Plain. View Full-Text
Keywords: land subsidence; InSAR; PSI; spatiotemporal evolution; Beijing Plain land subsidence; InSAR; PSI; spatiotemporal evolution; Beijing Plain
►▼ Show Figures 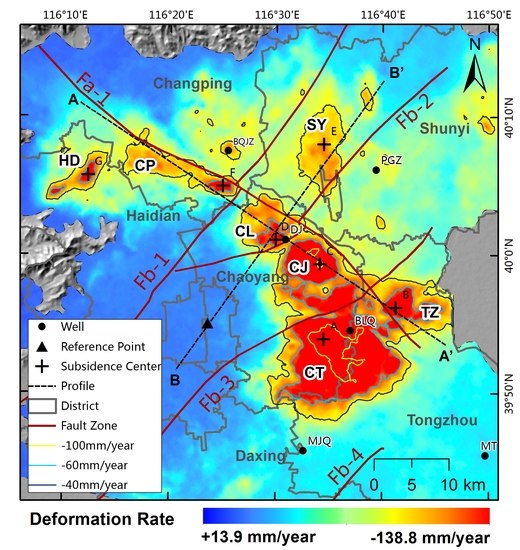