Evaluation of Heavy Precipitation Simulated by the WRF Model Using 4D-Var Data Assimilation with TRMM 3B42 and GPM IMERG over the Huaihe River Basin, China
Previous Article in Journal

Many satellite soil moisture products are today globally available in near real-time. These observations are of paramount importance for enhancing the understanding of the hydrological cycle and particularly useful for flood forecasting purposes. In recent decades, several studies assimilated satellite soil moisture observations into rainfall-runoff models to improve their flood forecasting skills. The rationale is that a better representation of the catchment states leads to a better stream flow estimation. By exploiting the strong physical connection between the soil moisture dynamic and rainfall, some recent studies demonstrated that satellite soil moisture observations can be also used for enhancing the quality of rainfall observations. Given that the quality of the rainfall is one of the main drivers of the hydrological model uncertainty, this begs the question—to what extent updating soil moisture states leads to better flood forecasting skills than correcting rainfall forcing? In this study, we try to answer this question by using rainfall-runoff observations from 10 catchments throughout the Mediterranean area and a continuous rainfall-runoff model—MISDc—forced with reanalysis- and satellite-based rainfall observations. Satellite soil moisture retrievals from the Advanced SCATterometer (ASCAT) are either assimilated into MISDc model via the Ensemble Kalman filter to update model states or, alternatively, used to correct rainfall observations derived from a reanalysis and a satellite-based product through the integration with soil moisture-based rainfall estimates. 4–9 years (depending on the catchment) of stream flow observations are organized into calibration and validation periods to test the two different schemes. Results show that the rainfall correction is favourable if the target is the predictions of high flows while for low flows there is a small advantage of the state correction scheme with respect to the rainfall correction. The improvements for high flows are particularly large when the quality of the rainfall is relatively poor with important implications for large-scale flood forecasting in the Mediterranean area. View Full-Text
Keywords: floods soil moisture; rainfall; data assimilation; rainfall correction; remote sensing; Mediterranean basin floods soil moisture; rainfall; data assimilation; rainfall correction; remote sensing; Mediterranean basin
►▼ Show Figures 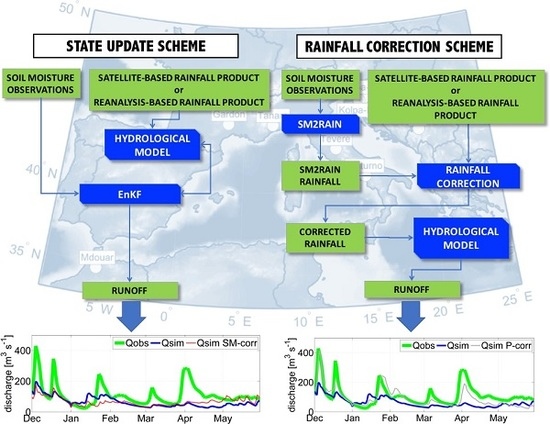