Human Wildlife Conflict and Impacts on Livelihood: A Study in Community Forestry System in Mid-Hills of Nepal

Human wildlife conflict (HWC) impacts the livelihood of many rural communities worldwide. This study investigated the impact of HWC on people living near community forests (CF) in Nepal. Using databases provided by the Division of Forest Offices and data obtained from surveys between October 2019–March 2020, we quantified the financial loss of HWC to the local people. Between 2015 and 2019, 3315, or 27%, of the livestock owned by the survey respondents were killed by wild predators in the Kaski and Tanahun Districts. Chicken (Gallus spp.) was the most common prey taken (80%), followed by sheep (Ovis spp.) and goats (Capra spp.) (15%), cows (Bos spp.) (2%), pigs (Sus spp.) (2%), and buffalo (Bubalus spp.) (1%). Leopards (Panthera pardus) were the primary predators, followed by golden jackals (Canis aureus), jungle cats (Felis chaus), yellow-throated martens (Martes flavigula), and Himalayan black bears (Ursus thibetanus). The financial loss of livestock during this period was USD $115,656.00, equivalent to USD $142.61 per household. Crops were also damaged and eaten by wildlife, and 2165 crop-raiding events were recorded between 2015 and 2019. Rice (Oryza sativa), followed by maize (Zea mays), millet (Panicum miliaceum), and potatoes (Solanum tuberosum) were the main crops lost. Rhesus monkeys (Macaca mulatta) were the most common crop raiders, causing 74% of the damage, followed by Indian field mice (Mus booduga) (12%). From 2015 to 2019, crop losses equated to USD $83,424.00. Forest regeneration on abandoned agricultural land expanded wildlife habitats, enabling wild animals to come within reach of human settlements, which increased the likelihood of HWC events. Although the success of the community forest restoration program resulted in increased forest-cover, marginally increasing biodiversity, the reduced distance between human settlements and wildlife habitat, compounded by a lack of natural prey, may have unwittingly exacerbated HWC in this region. We recommend surveying predator and prey populations in the forest habitat, and implementing a habitat management program to improve prey populations within the community forests. Meantime, we propose establishing a financial relief and insurance program for crop and livestock losses at the local community level to alleviate any financial difficulties to the local communities caused by HWC. View Full-Text
Keywords: community forestry; human wildlife conflict; livelihoods; Nepal; predators; crop-loss; habitat degradation and management community forestry; human wildlife conflict; livelihoods; Nepal; predators; crop-loss; habitat degradation and management
►▼ Show Figures 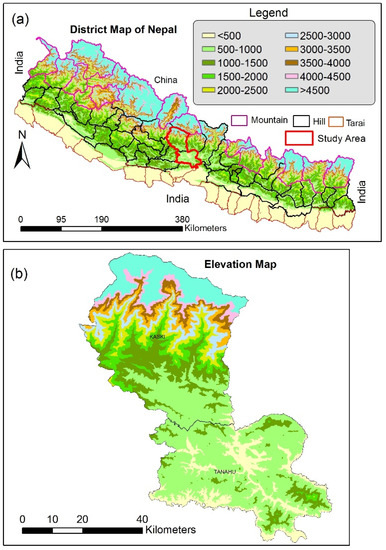