How COVID-19 Has Influenced the Purchase Patterns of Young Adults in Developed and Developing Economies: Factor Analysis of Shopping Behavior Roots
Previous Article in Journal

Sustainable Behavior among Romanian Students: A Perspective on Electricity Consumption in Households

This paper proposes a holistic vision of the urban metabolism (UM), viewing the city as a subsystem within an industrial ecosystem (IE) in which municipal-industrial symbiosis is essential to achieve sustainability goals. For this purpose, the metabolism of a large Spanish city, Zaragoza, was studied by analyzing the main fractions of its MSW. A methodology based on carbon footprint (CF) was developed to analyze the environmental impact—in terms of CO2—of the influence of households’ behavior, the City Council’s strategies, and the main MSW fractions. Zaragoza’s IE represents a footprint of 931,250 CO2 tons for the fractions studied, of which 438,000 CO2 tons are due to organic fraction, 180,371 to plastics and 154,607 to paper and cardboard, which are the three most significant contributors. If households selectively separated 100% of their waste, the footprint would drop to 648,660 tons of CO2. Furthermore, monetary savings were quantified through the CO2 emissions price. The proposed methodology accounts for the CF of the whole IE, not just the city. Moreover, it enables the creation of Sankey diagrams to visualize the distribution of emissions of each subsystem, highlighting the importance of cooperation between the city and its recycling industries to reduce its CF. View Full-Text
Keywords: urban metabolism; MSW management; carbon footprint; industrial symbiosis; household’s behavior urban metabolism; MSW management; carbon footprint; industrial symbiosis; household’s behavior
►▼ Show Figures 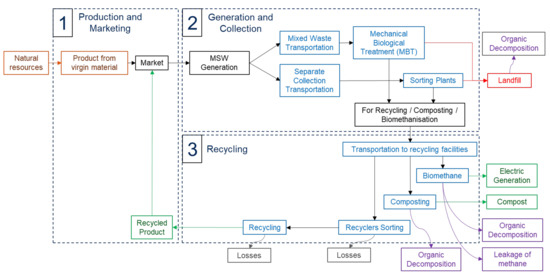