A Grounded Theory of Pro-Nature Behaviour: From Moral Concern to Sustained Action

Ceria- and urea-doped activated biochars were used as support for Ni-based catalysts for CO2 methanation purposes. Different materials were prepared and tested to find the best catalytic formulation. After several CO2 methanation experiments—carried out at 0.35–1.0 MPa and 300–500 °C—it was found that the most suitable catalyst was a wheat-straw-derived activated biochar loaded with 30 wt.% of CeO2 and 20 wt.% of Ni. Using this catalyst, a CO2 conversion of 65% with a CH4 selectivity of 95% was reached at 1.0 MPa, 400 °C, and 13,200 h−1. From the study of the influence of the gas hourly space velocity, it was deduced that the most likely reaction mechanism was a reverse water–gas shift reaction, followed by CO hydrogenation. N-doping of the carbon support as an alternative to the use of ceria was also investigated. However, both CO2 conversion and selectivity toward CH4 values were clearly lower than those obtained for the ceria-containing catalyst cited above. The outcomes of this work indicate that a renewable biomass-derived support can be effectively employed in the catalytic conversion of CO2 to methane. View Full-Text
Keywords: CO2 methanation; Sabatier reaction; biochar; urea; ceria CO2 methanation; Sabatier reaction; biochar; urea; ceria
►▼ Show Figures 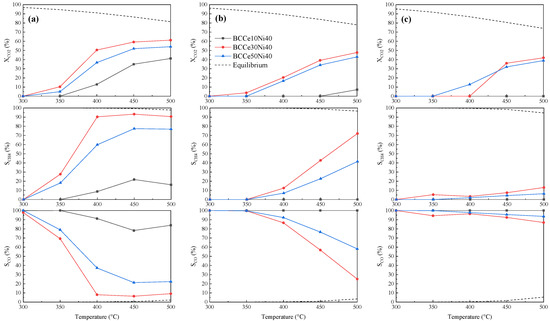