Intellectual Capital Disclosure: Some Evidence from Healthy and Distressed Banks in Italy

Bioeconomy is a concept increasingly used to circumscribe that part of the economy which depends on the utilisation of biomass. Recent empirical analyses of the European Union bioeconomies have adopted a definition of bioeconomy which also encompasses activities in “hybrid” sectors; inputs for these sectors include not only biomass, but also a relevant share of other materials. We use the same definition to assess the features and evolution of the bioeconomy in Norway. The Norwegian bioeconomy is complex, both in terms of sectoral composition and of technological development. Our analysis builds upon national statistics on value added and employment as well as on expert interviews, aimed at detecting Norway’s peculiarities in terms of biomass utilisation. We find that the Norwegian bioeconomy has strongly increased its productivity in recent years. An astonishingly high peak in productivity is registered for fishing and aquaculture, whose value added has evolved massively; at the same time, pharmaceuticals are experiencing a dramatic shift toward bio-based production. General trends in the country’s bioeconomy have thus emerged from different transformation pathways across sectors. Our empirical analysis leads to formulating a general reflection about the definition of bioeconomy and its implications for socioeconomic quantitative studies. View Full-Text
Keywords: bioeconomy; Norway; apparent labour productivity; value added; jobs and growth bioeconomy; Norway; apparent labour productivity; value added; jobs and growth
►▼ Show Figures 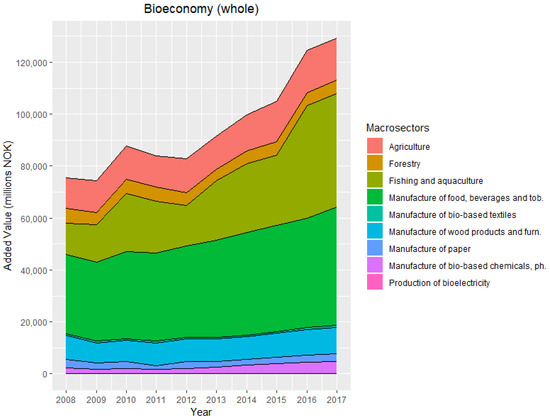