Does the Environmental Kuznets Curve Exist? An International Study

This study aims to examine the relationship between economic development and environmental degradation based on the Environmental Kuznets Curve (EKC) hypothesis. The level of CO2 emissions is used as the indicator of environmental damage to determine whether or not greater economic growth can lower environmental degradation under the EKC hypothesis. The investigation was performed on eight major international economic communities covering 44 countries across the world. The relationship between economic growth and environmental condition was estimated using the kink regression model, which identifies the turning point of the change in the relationship. The findings indicate that the EKC hypothesis is valid in only three out of the eight international economic communities, namely the European Union (EU), Organization for Economic Co-operation and Development (OECD), and Group of Seven (G7). In addition, interesting results were obtained from the inclusion of four other control variables into the estimation model for groups of countries to explain the impact on environmental quality. Financial development (FIN), the industrial sector (IND), and urbanization (URB) were found to lead to increasing CO2 emissions, while renewable energies (RNE) appeared to reduce the environmental degradation. In addition, when we further investigated the existence of the EKC hypothesis in an individual country, the results showed that the EKC hypothesis is valid in only 9 out of the 44 individual countries. View Full-Text
Keywords: Environmental Kuznets Curve; kink model; economic development; environment Environmental Kuznets Curve; kink model; economic development; environment
►▼ Show Figures 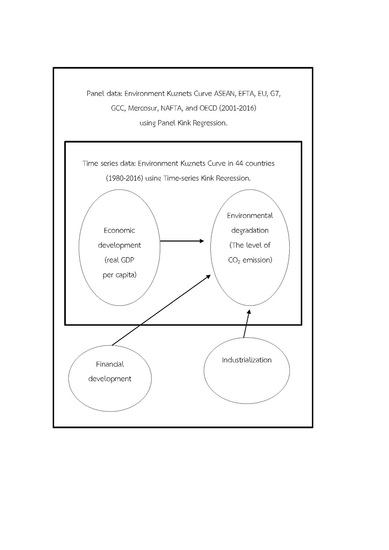