Beyond the Indicators: Improving Science, Scholarship, Policy and Practice to Meet the Complex Challenges of Sustainability
Previous Article in Journal

The accumulation of organic material on top of the mineral soil over time (a process called paludification) is common in Northern Boreal coniferous forests. This natural process leads to a marked decrease in forest productivity overtime. Topography both at the surface of the forest floor (i.e., above ground) and the subsurface (i.e., top of mineral soil which is underground) is known to play a critical role in the paludification process. Until recently, the availability of more accurate topographic information regarding the surface and subsurface was a limiting factor for land management and modeling of spatial organic layer thickness (OLT) variability, a proxy for paludification. However so far, no research has assessed which of these two topographic variables has the greatest influence on paludification. This study aims to assess which topographic variable (surface or subsurface) better explains paludification, using high-resolution remote sensing technology (i.e., Light Detection and Ranging: LiDAR and Ground Penetrating Radar: GPR). To this end, field soil measurements were made in over 1614 sites distributed throughout the reference Valrennes Experimental site in Canadian northern coniferous forests. Then, a machine learning model (i.e., Random Forest, RF) was implemented to rank a set of selected predictor topographic variables (i.e., slope, aspect, mean curvature, plan curvature, profile curvature, and topographic wetness index) using the Mean Decrease Gini (MDG) index as an indicator of importance. Results showed that overall 83% of the overall variance was explained by the RF selected model, while the derived subsurface topography predictors had the lowest MDGs for predicting paludification. On the other hand, the surface slope predictor had the highest MDGs and better explained paludification. This finding would be particularly useful for implanting sustainable management strategies based on the surface variables of paludified northern boreal forests. This study has also highlighted the potential of LiDAR data to provide surface topographic spatial detail information for planning and optimizing forest management activities in paludified boreal forests. This is even of great importance when we know that LiDAR variables are easier to obtain compared to GPR derived variables (subsurface topographic variables). View Full-Text
Keywords: random forest model; forest productivity; forest management; Clay Belt; LiDAR; mineral soil; Subsurface Digital Elevation Model (SUB-DEM); Digital Terrain Model (DTM) random forest model; forest productivity; forest management; Clay Belt; LiDAR; mineral soil; Subsurface Digital Elevation Model (SUB-DEM); Digital Terrain Model (DTM)
►▼ Show Figures 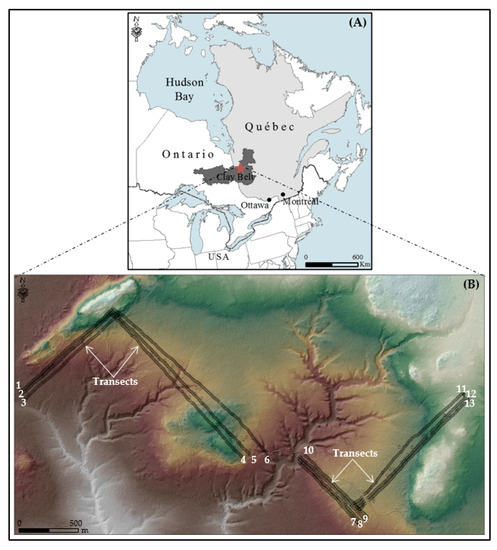