Shifting from Fragmentation to Integration: A Proposed Framework for Strengthening Agricultural Knowledge and Innovation System in Egypt
Previous Article in Journal

Rice as a Determinant of Vietnamese Economic Sustainability

This paper aims to examine the rice industry in Vietnam during the period 1997–2017, focusing its production and export. The total area of Vietnam is 33.121 million hectares, out of which 39.25% consists of agricultural land. The agricultural sector adds up to 24% of the gross domestic product (GDP), 20% of the total exports and over 70% of the total employment. Vietnam’s economy is highly dependent on the agricultural sector, specifically rice production, which constitutes 30% of the country’s total agricultural production value. While its production at first aimed to ensure food security in the country, to date, Vietnam is one the world’s largest exporters. While extensive research has explored the rice industry, studies looking at the production through the use of fertilizers, external factors such as the exporting price of other countries and world consumption rates are still lacking. Given the complexity of the topic, data were analyzed through descriptive, econometric and quantitative methods. For production and export analyses, two and four hypotheses were derived and examined, respectively, all based on economic theory. The model consisted of two equations: (i) the paddy production is impacted by rice’s yield and fertilizer use and (ii) in addition to internal factors, the growth of exporting rice in Vietnam depends also on external factors such as Thailand’s rice export price and world consumption rates. Based on the model, a dynamic forecasting method was employed, using the previous forecast values of the dependent variables to compute the future ones. Findings showed that 98% of Vietnam’s rice production is explained through the yield and fertilizer usage and 83% of Vietnam’s rice export is explained by the production, the price in Vietnam and Thailand and the consumption levels around the world. When it comes to forecasting, an 8% growth is predicted with a peak in quantity produced, with 49,461 thousand tons in 2023, yet with difficulties when it comes to exporting. The research predicts a stagnation in exports. View Full-Text
Keywords: rice; Vietnam; agriculture; foreign trade rice; Vietnam; agriculture; foreign trade
►▼ Show Figures 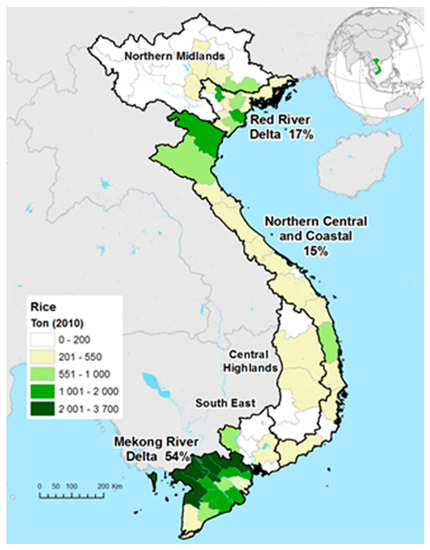