The Motivation of Urban Gardens in Mountain Areas. The Case of South Tyrol
Previous Article in Special Issue

The most vulnerable countries often face a double burden in relation to climate change—they are at high risk to the impacts and are least equipped to cope and adapt. Global climate policy since the Convention in 1992, until most recently with the global goal on adaptation in the Paris Agreement, has manifested the importance of prioritizing adaptation support to the most vulnerable countries. The main objective of this study is to understand the enabling and constraining factors that play a role in the process of allocating and accessing global adaptation assistance. We adopted a mixed-methods approach combining two major streams of analysis. First, this paper aims to track bilateral adaptation finance to all so-called developing countries, as bilateral support has been the largest share of international adaptation finance. Second, the paper draws on semi-structured expert interviews and looks at the country level to identify the factors beyond vulnerability that play a role in the distribution of adaptation finance from a recipient’s and a donor’s perspective, using India and Germany as examples. The analysis yields three main findings. First, countries’ vulnerability as measured by standard metrics does not seem to be the prime factor explaining the distribution of available bilateral adaptation assistance. This is in contrast to the political narrative in the emerging climate finance architecture. Second, interview data identified other factors beyond vulnerability that play a role from a donor perspective, such as the perceived capacity to manage and implement projects, the commitment given to climate change and other political priorities. Third, from a recipient perspective, rather than its vulnerability level in a global comparison, strong institutional capacity played a prominent role in attracting adaptation finance. Looking out into the future, the findings underscore the practical and political challenges in relation to a vulnerability-oriented prioritization of funding and they point towards the need to increase countries’ capacities to attract and manage international adaptation support. The findings also raise questions on how to overcome the vexing conflict in the emerging adaptation finance architecture between accommodating for donors’ requirements of high fiduciary standards and enabling access by the most vulnerable countries, which are often short of resources and institutional capacities. View Full-Text
Keywords: tracking adaptation finance; vulnerability; bilateral aid; Germany; India tracking adaptation finance; vulnerability; bilateral aid; Germany; India
►▼ Show Figures 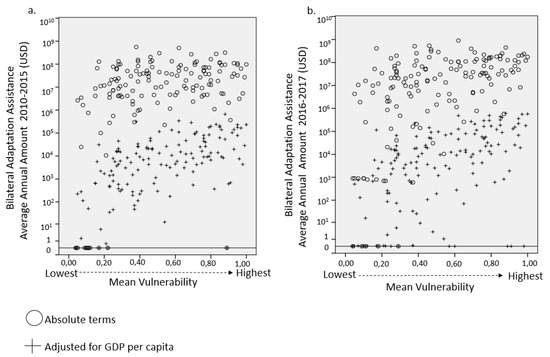