The growing demand for meat and animal products in emerging economies has become a concern given its environmental and health impacts. The sustainable diets approach has emerged to address the multidimensional challenge of reaching a context-based diet that minimizes negative environmental impacts, provides health and nutrition to all segments of the population, and is affordable and coherent with the local culture and traditions. The aim of this study was to explore the prospects for meat consumption reduction and challenges encompassing the environmental, and health spheres. In order to do so, we analyzed: (1) The current carbon and water per capita footprints for two animal-based options and two plant-based options; and (2) the contribution of each food alternative to the local dietary reference intakes based on average per capita daily consumption and significant differences among the nutrient values for each food alternative through a two proportion Z-test. Our results show that the annual per capita carbon and water footprints for beef were higher compared to other alternatives, despite a higher per capita consumption of chicken. Also, our findings reveal that the average consumption of beef and chicken contributes 39% of the maximum recommended daily intake for cholesterol and 61% of the Recommended Dietary Allowance for protein in the country. Finally, relevant promoting forces and barriers related to meat consumption reduction were identified based on the two dimensions evaluated. This study calls for a joint effort to make changes in public policy, food systems, and consumer education. View Full-Text
Keywords: sustainable diets; sustainable food consumption; environmental impacts of meat; health impacts of meat; meat consumption reduction sustainable diets; sustainable food consumption; environmental impacts of meat; health impacts of meat; meat consumption reduction
►▼ Show Figures 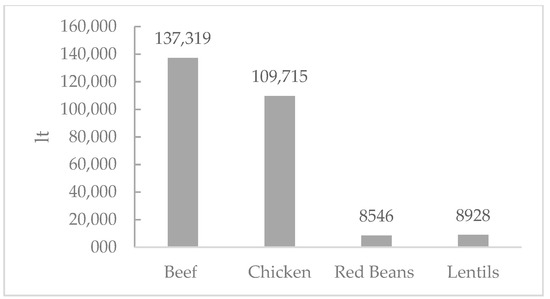