Relatively low travel costs and abundant opportunities for research funding in Switzerland and other developed countries allow researchers large amounts of international travel and collaborations, leading to a substantial carbon footprint. Increasing willingness to tackle this issue, in combination with the desire of many academic institutions to become carbon-neutral, calls for an in-depth understanding of academic air travel. In this study, we quantified and analyzed the carbon footprint of air travel by researchers from the École Polytechnique Fédérale de Lausanne (EPFL) from 2014 to 2016, which is responsible for about one third of EPFL’s total CO2 emissions. We find that the air travel impact of individual researchers is highly unequally distributed, with 10% of the EPFL researchers causing almost 60% of the total emissions from EPFL air travel. The travel footprint increases drastically with researcher seniority, increasing 10-fold from PhD students to professors. We found that simple measures such as restricting to economy class, replacing short trips by train and avoiding layovers already have the potential to reduce emissions by 36%. These findings can help academic institutions to implement travel policies which can mitigate the climate impact of their air travel. View Full-Text
Keywords: carbon footprint; CO2 emissions; air travel; environmental footprint mitigation carbon footprint; CO2 emissions; air travel; environmental footprint mitigation
►▼ Show Figures 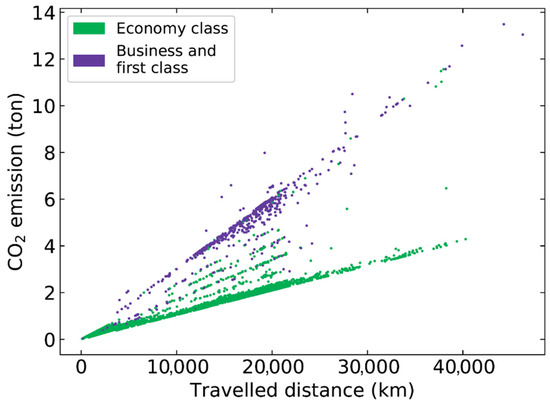