Latecomers to the Fossil Energy Transition, Frontrunners for Change? The Relevance of the Energy ‘Underdogs’ for Sustainability Transformations
Previous Article in Journal

Sustainability Indicators Past and Present: What Next?

Behind the Scenarios: World View, Ideologies, Philosophies. An Analysis of Hidden Determinants and Acceptance Obstacles Illustrated by the ALARM Scenarios

In situations of uncertainty, scenarios serve as input for scientifically informed decision making. However, past experience shows that not all scenarios are treated equally and we hypothesise that only those based on a world view shared by scientists and decision makers are perceived as credible and receive full attention of the respective group of decision makers. While intuitively plausible, this hypothesis has not been analysed by quantitative correlation analyses, so instead of drawing on quantitative data the paper analyses the archetypical scenarios developed in the ALARM project to substantiate the plausibility by a comparative analysis of world views, value systems and policy orientations. Shock scenarios are identified as a means to explore the possibility space of future developments beyond the linear developments models and most scenario storylines suggest. The analysis shows that the typical scenarios are based on mutually exclusive assumptions. In conclusion, a comparison of storylines and empirical data can reveal misperceptions and the need to rethink world views as a necessary step to open up to new challenges. Deeply held beliefs will make this transition unlikely to happen without severe crises, if not dedicated efforts to explicate the role of world views for scenarios and policies are undertaken. View Full-Text
Keywords: scenarios; world views; values; policies; models and modes of science scenarios; world views; values; policies; models and modes of science
►▼ Show Figures 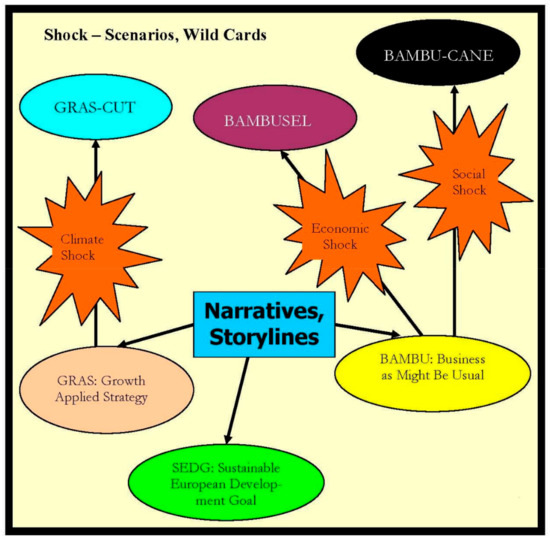 Spangenberg, J.H. Behind the Scenarios: World View, Ideologies, Philosophies. An Analysis of Hidden Determinants and Acceptance Obstacles Illustrated by the ALARM Scenarios. Sustainability 2018, 10, 2556.


Spangenberg JH. Behind the Scenarios: World View, Ideologies, Philosophies. An Analysis of Hidden Determinants and Acceptance Obstacles Illustrated by the ALARM Scenarios. Sustainability. 2018; 10(7):2556.


Spangenberg, Joachim H. 2018. "Behind the Scenarios: World View, Ideologies, Philosophies. An Analysis of Hidden Determinants and Acceptance Obstacles Illustrated by the ALARM Scenarios." Sustainability 10, no. 7: 2556.