Short-Term Impacts of Livestock Grazing on Vegetation and Track Formation in a High Mountain Environment: A Case Study from the Himalayan Miyar Valley (India)

Animals’ activities are a significant geomorphologic factor. An important reliefogenic role is played by animals introduced by man; that is, livestock. The activity of livestock on the earth’s surface can be direct (horizontal displacement of the soil), or indirect (preparation of ground for degradation). In this research the areas that livestock tread most often were put under examination, that is, places used for resting (e.g., during the night) and paths used for moving (e.g., while passing to and from grazing spots). The experimental research areas were divided into two groups. During the two-week study period it was noted that (1) the number of plants and their stems had declined by 9.5% and 19% respectively, and the paths had widened by 6%; (2) the soil level had decreased, uncovering the measurement pins by 3.5 mm up to 24 mm, depending on the slope of the ground, while in the comparison (control) areas the pins were uncovered only up to an average 1.8 mm. The results of the research show the scale of the phenomenon of zoogenic erosion caused by livestock. Based on the research the following formula has been elaborated . This provided the opportunity to calculate the average (hypothetical) data for soil loss (y), according to the slope degree (x), the number of animals (N), the time that those animals spend in the area (T), and the static pressure they caused on the ground (SP). The paper makes recommendations that could lead to a reduction in soil erosion caused by livestock. View Full-Text
Keywords: soil erosion; alpine meadow; grazing; mountain environment; Himalaya soil erosion; alpine meadow; grazing; mountain environment; Himalaya
►▼ Show Figures 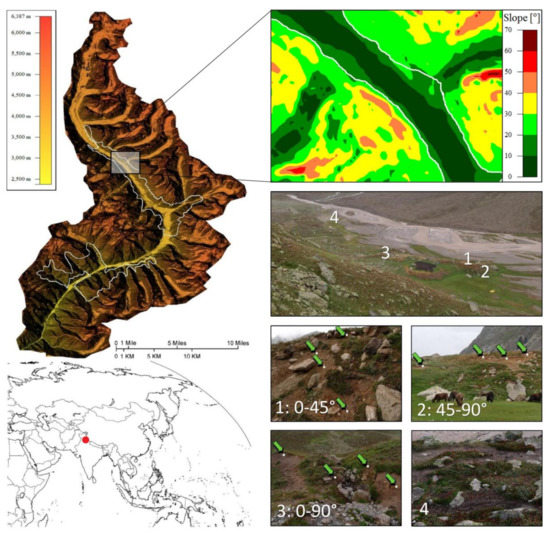