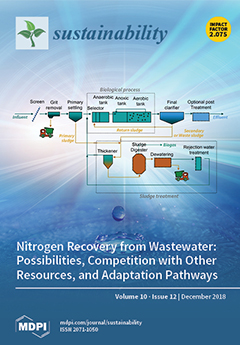 Cover Story (view full-size image): The demand for nitrogen as fertilizer grows. Nitrogen-based fertilizers are produced with the Haber–Bosch process. Through wastewater treatment, nitrogen is finally released back to the atmosphere as N2 gas. This approach requires much energy, and nitrogen is mainly lost to the atmosphere without reuse. Most promising technologies for nitrogen recovery from wastewater are struvite precipitation, treatment of digester reject water by air stripping, vacuum membrane filtration, hydrophobic membrane filtration, and treatment of air from thermal sludge drying. However, different technologies in parallel are required to reach sustainable solutions. Using adaptation pathways maps, it is possible to choose combinations of technologies for nitrogen recovery. Nitrogen recovery does not interfere with the recovery of the other resources, such as phosphorus and cellulose, and biogas production. View this paper
Previous Issue
Volume 10, November
Next Issue
Volume 11, January-1
We use cookies on our website to ensure you get the best experience. Read more about our cookies here.
Accept
We have just recently launched a new version of our website. Help us to further improve by taking part in this short 5 minute survey here. here.
Never show this again