Does the Polycentric Urban Region Contribute to Economic Performance? The Case of Korea
Next Article in Special Issue

From Herding to Farming under Adaptation Interventions in Southern Kenya: A Critical Perspective
Previous Article in Journal

Barriers to Knowledge Management in the Health Sector of Pakistan

Territorial Conflicts, Agency and the Strategic Appropriation of Interventions in Kenya’s Southern Drylands

A number of scholars have noted that interventions, such as development programmes and climate change adaptation projects, that simplify complex social realities and thus lose sight of the relational dynamics beyond the target or beneficiary group, risk contributing to conflict. This article examines how a series of interventions in a particular dryland area in southern Kenya became embroiled in a long-running territorial conflict between the Loita Maasai (the beneficiary community) and their neighbours, the non-beneficiary Purko Maasai. Based on ethnographic research and by taking a historical perspective, it shows how Loita Maasai leaders systematically appropriated these outside interventions, used and reworked them with the strategic aim of stopping land loss to ongoing Purko encroachment. The analysis reveals two ways in which Loita leaders realized this: (a) by using interventions to stake out spatial claims to land; and (b) by capitalizing on the tendency of interventions to simplify local contexts. This article contributes to the debate on the linkages between intervention and conflict by highlighting the agency of intervention beneficiaries and showing that, through their actions, interventions may unwittingly reproduce and even aggravate existing conflicts. View Full-Text
Keywords: territorial conflict; interventions; agency; drylands; Loita Maasai; Kenya; natural resource conflict territorial conflict; interventions; agency; drylands; Loita Maasai; Kenya; natural resource conflict
►▼ Show Figures 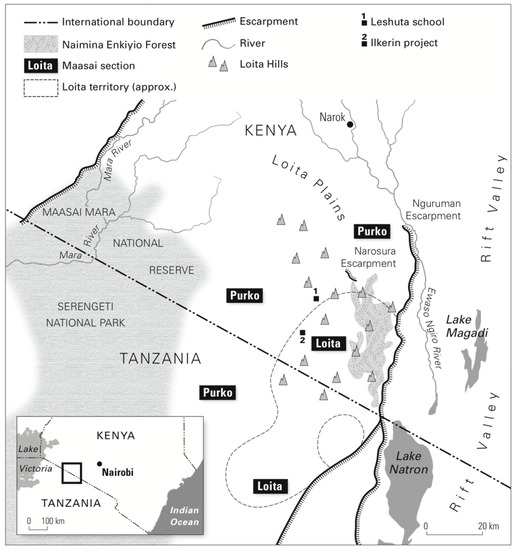