VNF Placement Optimization at the Edge and Cloud †

Network Function Virtualization (NFV) has revolutionized the way network services are offered to end users. Individual network functions are decoupled from expensive and dedicated middleboxes and are now provided as software-based virtualized entities called Virtualized Network Functions (VNFs). NFV is often complemented with the Cloud Computing paradigm to provide networking functions to enterprise customers and end-users remote from their premises. NFV along with Cloud Computing has also started to be seen in Internet of Things (IoT) platforms as a means to provide networking functions to the IoT traffic. The intermix of IoT, NFV, and Cloud technologies, however, is still in its infancy creating a rich and open future research area. To this end, in this paper, we propose a novel approach to facilitate the placement and deployment of service chained VNFs in a network cloud infrastructure that can be extended using the Mobile Edge Computing (MEC) infrastructure for accommodating mission critical and delay sensitive traffic. Our aim is to minimize the end-to-end communication delay while keeping the overall deployment cost to minimum. Results reveal that the proposed approach can significantly reduce the delay experienced, while satisfying the Service Providers’ goal of low deployment costs. View Full-Text
Keywords: NFV; cloud computing; MEC; IoT; VNF placement; service chain NFV; cloud computing; MEC; IoT; VNF placement; service chain
►▼ Show Figures 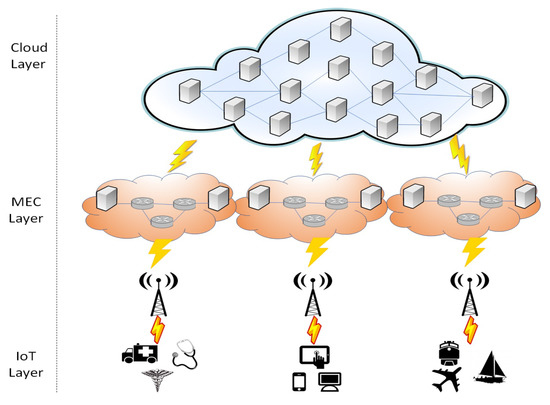