Antimicrobial photodynamic therapy (aPDT) also known as photodynamic inactivation (PDI) is a promising strategy to eradicate pathogenic microorganisms such as Gram-positive and Gram-negative bacteria. This therapy relies on the use of a molecule called photosensitizer capable of generating, from molecular oxygen, reactive oxygen species including singlet oxygen under light irradiation to induce bacteria inactivation. Ru(II) polypyridyl complexes can be considered as potential photosensitizers for aPDT/PDI. However, to allow efficient treatment, they must be able to penetrate bacteria. This can be promoted by using nanoparticles. In this work, ruthenium-polylactide (RuPLA) nanoconjugates with different tacticities and molecular weights were prepared from a Ru(II) polypyridyl complex, RuOH. Narrowly-dispersed nanoparticles with high ruthenium loadings (up to 53%) and an intensity-average diameter < 300 nm were obtained by nanoprecipitation, as characterized by dynamic light scattering (DLS). Their phototoxicity effect was evaluated on four bacterial strains (Staphylococcus aureus, Staphylococcus epidermidis, Escherichia coli and Pseudomonas aeruginosa) and compared to the parent compound RuOH. RuOH and the nanoparticles were found to be non-active towards Gram-negative bacterial strains. However, depending on the tacticity and molecular weight of the RuPLA nanoconjugates, differences in photobactericidal activity on Gram-positive bacterial strains have been evidenced whereas RuOH remained non active. View Full-Text
Keywords: antimicrobial photodynamic therapy; nanoparticles; photodynamic inactivation; polylactide; ruthenium complexes antimicrobial photodynamic therapy; nanoparticles; photodynamic inactivation; polylactide; ruthenium complexes
►▼ Show Figures 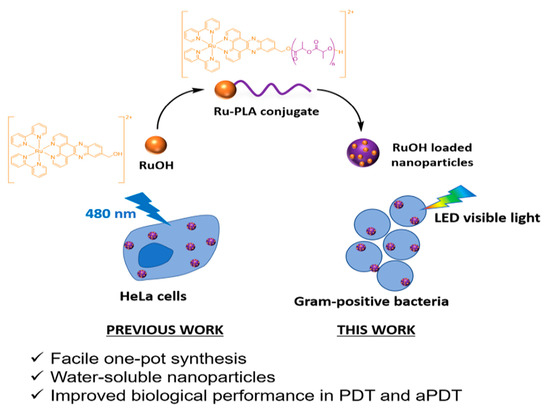