Despite much progress in the diagnosis and treatment of cancer, tumour diseases constitute one of the main reasons of deaths worldwide. The side effects of chemotherapy and drug resistance of some cancer types belong to the significant current therapeutic problems. Hence, searching for new anticancer substances and medicines are very important. Among them, bacterial proteins and peptides are a promising group of bioactive compounds and potential anticancer drugs. Some of them, including anticancer antibiotics (actinomycin D, bleomycin, doxorubicin, mitomycin C) and diphtheria toxin, are already used in the cancer treatment, while other substances are in clinical trials (e.g., p28, arginine deiminase ADI) or tested in in vitro research. This review shows the current literature data regarding the anticancer activity of proteins and peptides originated from bacteria: antibiotics, bacteriocins, enzymes, nonribosomal peptides (NRPs), toxins and others such as azurin, p28, Entap and Pep27anal2. The special attention was paid to the still poorly understood active substances obtained from the marine sediment bacteria. In total, 37 chemical compounds or groups of compounds with antitumor properties have been described in the present article. View Full-Text
Keywords: anticancer; bacteria; proteins; anticancer antibiotics; anticancer enzymes; nonribosomal peptides; bacteriocins; bacterial toxins anticancer; bacteria; proteins; anticancer antibiotics; anticancer enzymes; nonribosomal peptides; bacteriocins; bacterial toxins
►▼ Show Figures 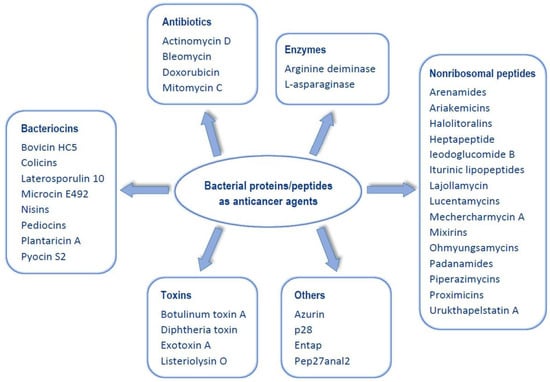