Citrus leprosis virus C (CiLV-C) causes a severe disease affecting citrus orchards in the Western hemisphere. This study reveals the molecular variability of the virus by analyzing four genomic regions (p29, p15, MP and RNA2-intergenic region) distributed over its two RNAs. Nucleotide diversity (π) values were relatively low but statistically different over the analyzed genes and subpopulations, indicating their distinct evolutionary history. Values of πp29 and πMP were higher than those of πp15 and πRNA2–IR, whereas πMP was increased due to novel discovered isolates phylogenetically clustered in a divergent clade that we called SJP. Isolate BR_SP_SJP_01 RNA1 and RNA2 sequences, clade SJP, showed an identity of 85.6% and 88.4%, respectively, with those corresponding to CiLV-C, the type member of the genus Cilevirus, and its RNA2 5′-proximal region was revealed as a minor donor in a putative inter-clade recombination event. In addition to citrus, BR_SP_SJP_01 naturally infects the weed Commelina benghalensis and is efficiently transmitted by Brevipalpus yothersi mites. Our data demonstrated that negative selection was the major force operating in the evaluated viral coding regions and defined amino acids putatively relevant for the biological function of cilevirus proteins. This work provides molecular tools and sets up a framework for further epidemiological studies. View Full-Text
Keywords: cilevirus; citrus leprosis; Brevipalpus-transmitted viruses cilevirus; citrus leprosis; Brevipalpus-transmitted viruses
►▼ Show Figures 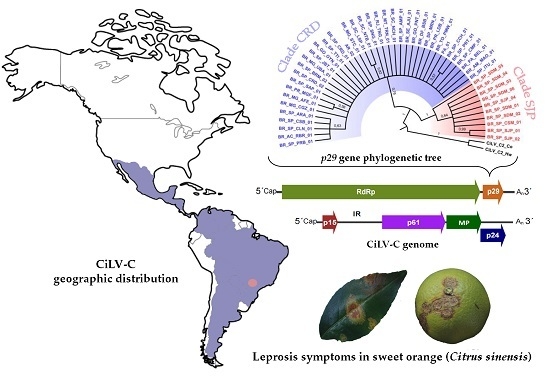